Yesterday the world heard the sad news that the actor Irrfan Khan had passed away aged just 53. An award-winning film star in India, Khan also had a noteworthy presence as a supporting actor in Western films — the police inspector in Slumdog Millionaire; the owner of the eponymous park in Jurassic World; the adult version of the main character in Life of Pi; not to mention The Darjeeling Limited, The Amazing Spider-Man, Inferno, and more. I’d seen all of those films and noted Khan’s presence — he’s the kind of actor who turns up and elevates the film almost just by being there, bringing a depth and interest to even the smallest roles. But I’d never seen any of the many films (he has 151 acting credits on IMDb) in which he played the lead, so it seemed appropriate to turn to one of the most internationally acclaimed of his films, The Lunchbox, in tribute.

Khan plays Saajan, an office worker who receives his lunch every day via the dabbawala service. It’s a remarkable network that delivers 200,000 lunches daily across Mumbai with unerring accuracy. Indeed, their precision is so famed that one of the major criticisms of this film in some quarters was that its premise is too far-fetched — that being that, due to a continued mixup, Saajan begins to receive the lunches Ila (Nimrat Kaur) has prepared for her husband, rather than the ones he ordered from a local restaurant. He’s so impressed with the quality of the food, when the lunchbox is returned Ila observes that it looks to have been licked clean. This is good news, because she was trying to up the quality of her lunches as a way to reignite her stagnant marriage; but when her husband returns home still disinterested, with only thin praise for something she hadn’t even included in his lunch, she realises the delivery mistake immediately. But politeness compels her to send lunch again, this time with a note explaining the mixup. After a rocky start, soon Saajan and Ila are in daily communication through short letters passed back and forth in the lunchbox. 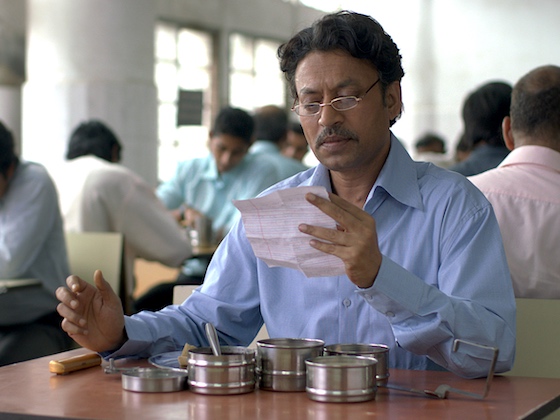 Both are characters desperately in need of that connection. Ila’s loveless marriage, and young daughter who spends most of the day at school, means her primary human contact comes in shouted conversations with her upstairs neighbour. Saajan, meanwhile, is taking early retirement, but first must train Shaikh (Nawazuddin Siddiqui), the overeager new recruit appointed to replace him. He tries to duck even this level of interaction; at home, he tells off kids for playing in the road outside his house, refusing to return their ball. We could infer Saajan is a misanthrope, and the impression is given that his colleagues do (they share a story that he once kicked a cat in front of a bus then casually walked away), but the film affords us more insight than that, primarily through Khan’s performance. It’s the underlying sadness in his eyes that first give the clue to his true loneliness, and the way his demeanour begins to brighten as the relationship with Ila brings a spark back into his life.

Lest you think this is all somewhat dour, the way it plays is uplifting. Saajan and Ila may be miserable at the start, and continue to confront problems in their lives throughout the film, but their connection injects a measure of happiness into both their lives, the mutual support helping them through. Plus there’s a strong vein of humour, at first from the faltering beginnings of our leads’ relationship, then from the antics of Siddiqui’s junior employee. This isn’t the kind of broad comedy you might expect from a Bollywood movie, but something more grounded and closer to reality. At first Shaikh seems as irritating to us as he is to Saajan, but soon the latter’s growing empathy leads him to become a father figure to the younger man, and we too begin to see the truth underneath his cheery facade.

While that subplot is a bonus, the film really comes down to Saajan and Ila, and consequently the performances of Khan and Kaur. That’s particularly important because so much of the story occurs in the form of letters, and so the characters’ true reactions come across in doleful expressions, or changes in posture or behaviour; subtle, human indicators that leave us in no doubt what they’re feeling, and only strengthen our own connection to and investment in these characters. This pair of deeply-felt performances carefully steer The Lunchbox into being a heartfelt, quietly affecting film.