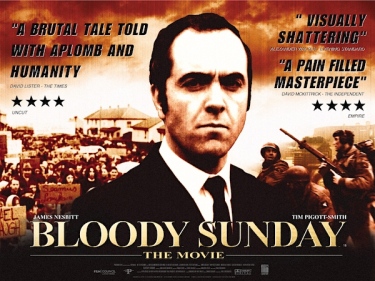 January 30, 1972
a day written in history
a day when innocence died
when truth was sacrificed
and lives were changed forever

Our Hero
James Nesbitt stars as MP and civil rights activist Ivan Cooper, a Protestant who was elected in a mostly Catholic constituency, and the organiser of what was supposed to be a peaceful protest march.

Our Villains
The British Army don’t come across in the best light, with Tim Piggot-Smith’s Major General Robert Ford issuing hostile orders, and the troops eager for a fight. The depiction is tempered by Nicholas Farrell as Brigadier Patrick MacLellan, battling his conscious even as he must carry out his orders.

Memorable Quote
“I just want to say this to the British Government. You know what you’ve just done, don’t you? You’ve destroyed the civil rights movement, and you’ve given the IRA the biggest victory it will ever have. All over this city tonight, young men — boys — will be joining the IRA, and you will reap a whirlwind.” — Ivan Cooper

Memorable Scene
After the day is done, Ivan Cooper delivers the above statement at a press conference. Intercut, at inconspicuous locations and under the cover of dark, young men queue up to join the IRA.

Technical Wizardry
Shot handheld on 16mm by cinematographer Ivan Strasburg, Bloody Sunday looks like news footage. It’s not trying to pass itself off as documentary, but rather it places the viewer in the heart of events. Clever shot selection and Clare Douglas’ editing mean that, even though a sense of confusion is evoked, the chronology and geography of events is maintained.

Making of
“Making the film Bloody Sunday was important for me, not only as an actor but for my understanding of myself as an Ulsterman. It helped me realise that this episode was the watershed, and that the ensuing 30 years of conflict in Northern Ireland were in large part due to what happened that day in 1972. For it was on that night that young men all over the country joined up with the IRA in a sense of rage and injustice at what had happened.” — James Nesbitt, The Independent

What the Critics Said
“you have to remind yourself at moments that you’re not looking at a documentary. […] Filmed in 16mm, with a hand-held camera that seems to be breathlessly attempting to keep up with the chaotic events, the movie has a stunning immediacy. It doesn’t feel as if Greengrass has staged the events, but that his camera (in the expert hands of cinematographer Ivan Strasburg) happened to be there when the tragedy occurred, a witness to the British officers’ planning, to the marchers’ anger and panic, to the soldiers’ gung-ho macho and to the cover-up that followed.” — David Ansen, Newsweek

What the Public Say
“The film has been criticized by some as focusing too much on the Cooper character, encouraging a “great man” view of history. This criticism seems overblown when one considers the breadth of Bloody Sunday, but Greengrass does acknowledge an interest in placing Cooper at the fore as a kind of “man between worlds,” being a Protestant politician campaigning for peace across Northern Ireland and for civil rights denied to his Catholic countrymen.” — spinenumbered, Make Mine Criterion!
(Be advised, the Criterion Collection edition of the film described in this article is wishful thinking rather than a genuine release.)

Bloody Sunday is a tough film to write about in a somewhat frivolous format like this one. It’s a film about a terrible moment in history, a shameful day for the British Army and a tragic one for the people of Northern Ireland, which it presents with documentary realism and an objective perspective, more concerned with presenting the facts as best it can than with apportioning blame. Even given that, it’s an inescapably emotional and affecting film. Powerful moviemaking. 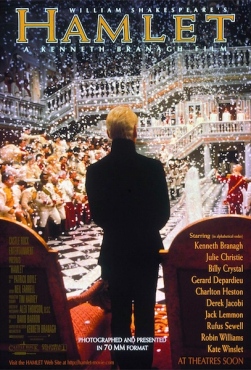 Following his success with Henry V and Much Ado About Nothing, Kenneth Branagh tackled arguably Shakespeare’s most revered play, Hamlet. And he didn’t do it by half. It’s the first ever full-text screen adaptation, which means it clocks in just shy of four hours; he unusually shot it on 70mm film, which means it looks gorgeous; and, while he grabbed the title role himself, he assembled around him a ludicrously star-packed cast from both sides of the pond — in alphabetical order, there’s Richard Attenborough, Brian Blessed, Richard Briers, Julie Christie, Billy Crystal, Judi Dench, Gerard Depardieu, Nicholas Farrell, John Gielgud, Rosemary Harris, Charlton Heston, Derek Jacobi, Jack Lemmon, John Mills, Jimi Mistry, Rufus Sewell, Timothy Spall, Don Warrington, Robin Williams and Kate Winslet — not to mention several other recognisable faces. Even Ken Dodd’s in there!

But, with impressive statistics and name-dropping put to one side, what of the film itself? Well, it’s a bit of a slog, especially for someone unfamiliar with the text. While there is much to keep the viewer engaged, the high level of attention required can make it a little wearing; certainly, I took the intermission as a chance to split the film over two nights. Amusingly, the second half uses the original text to provide a sort of “Previously on Hamlet“, which was very useful 24 hours later. None of this is the fault of Branagh or his cast, who do their utmost to make the text legible for newbies — for example, there are cutaways to events that are described but not shown by Shakespeare, which, among other things, help establish who Fortinbras is (Rufus Sewell, as it turns out) before he finally turns up later on.

That said, some of the performances are a bit mixed. Branagh is a good director and not a bad actor, but his Shakespearean performances are variations on a theme rather than fully delineated characters. While there a new facets on display here thanks to the complexity of the character, there are also many elements that are eerily reminiscent of his Henry V and Benedick. The Americans among the cast seem to be on best behaviour and generally cope surprisingly well, while Julie Christie achieves an above average amount of fully legible dialogue. Perhaps the biggest casting surprise is Judi Dench, appearing in what is barely a cameo — one wonders if the film-career-boosting effects of a certain spy franchise would have changed that.

The best thing about this version, however, is how it looks. Much credit to cinematographer Alex Thomson for using the larger 70mm format to its full, loading every frame with vibrant colours and packing detail into even the quietest moments. Not every frame is a work of art — there is, after all, a story to be told — but there’s more than enough eye candy to go round. Also, a nod to the editing (the work of Neil Farrell), which makes good use of long takes — many of them full of camera moves — but also sharply edited sequences, such as the all-important play. The fast cuts make for a joyously tense scene in a way only cinema can provide, which I suppose is rather ironic during a ‘play within a play’.

For fans of Shakespeare, I suspect Branagh’s Hamlet is a wonderful experience, finally bringing the complete text to the screen and executing it all so well. For us mere mortals, it’s a beautifully shot and engagingly performed film, that I’m sure would benefit from a greater understanding of the text.