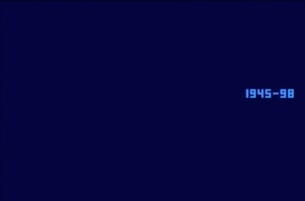 Its setup is quite simple: it charts every nuclear explosion between the titular years; the total, by-the-way, is 2,053. These explosions play out as flashing dots on a world map; different colours indicate which country was responsible for the explosion, accompanied by running totals. You might note at the end that the US are solely responsible for over half.

The film begins with close-ups: the first test by the US; then the explosions at Hiroshima and Nagasaki that ended World War II. Then it zooms out, to a map of the whole world (arranged differently to how we’re used to seeing it here, with the UK and Europe off to the far left and America on the right. I suppose this is neither here nor there, but it took me a bit to get my bearings on where the explosions were happening). From then it progresses through time at a precise rate of one month equalling one second. If that sounds quite reasonable, the maths holds that it’s 636 seconds, aka ten-and-a-half minutes; or, quite a long time to look at a static map with flashing lights.

There are long gaps between explosions to begin with, but as it heads into the ’60s things pick up (so to speak). As time wears on further, the initially lifeless map transforms into an almost hypnotic array of multi-coloured flashes and variously toned bleeps (provided your

attention didn’t already wander, that is). There are ultimately so many flashes and bleeps, and the effect is so lulling, that I had to force myself to remember these represented Big Nasty Bombs that were Not A Good Thing. Perhaps something more aurally grating would’ve been appropriate; the counter argument going that this would cause even more viewers to abandon the work.

Sadly, it’s become outdated: the bleeps all but stop after 1993 but, as the webpage you can view it on notes, North Korea have since tested nuclear weapons several times. Perhaps Hashimoto needs to add another 2 minutes and 24 seconds, just to ram home that the issue of nuclear weapons is still depressingly relevant.

So is it a film, or video Art, or just another online video? It’s all of the above (of course). 1945-1998 isn’t exactly fun viewing — really speaking, it’s a kind of moving graph — but, if one sticks with it, and despite its outdatedness, Hashimoto makes his point reasonably well.