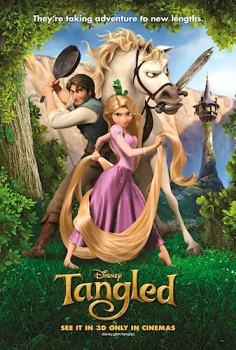 Disney’s 50th animated feature is Rapunzel in all but name, for no particularly good reason. It seemed to be met with universal praise on its release last year, critics hailing it as a return to Disney’s previous quality after a run of lacklustre releases, in particular the underwhelming return to 2D in the year before’s The Princess and the Frog.

Well, to get that comparison immediately out of the way, Tangled isn’t as good as The Princess and the Frog in my estimation. I’m not sure why it seems to have been more widely praised — it’s solid and good fun, but I thought Frog had more going for it.

Which isn’t to say Tangled is bad. It’s funny, which is its biggest asset, and exciting at times — as usual, the highly moveable camera of CG animation adds fluidity, speed and excitement to the action sequences, making them one of the high points.

It’s not all good and shiny though. The setting — a comedic-ish fantasy-kingdom world — can come across a bit like lightweight Shrek, lacking the anachronistic postmodern real-world references that made that film zing. Worse, the songs are distinctly unmemorable — I’d forgotten some of them by the time it came to their own reprise. A gang of thugs singing about their dreams is the best thanks to its comedy, but I couldn’t hum or sing any of it for you now. I especially lament the lack of a decent villain’s song,

a number I usually particularly enjoy. It has one, I suppose, but it’s one of the weakest examples I’ve ever heard.

Tangled isn’t bad by any measure, but I don’t feel it should be the praise-magnet it became. There are certainly better Disney musicals — it can’t hold a candle to those; and there are better funny fairytales too — but at least it holds up as a solid addition to that sub-genre.

The UK TV premiere of Tangled is on Disney Cinemagic this Sunday, 23rd October, at 5pm and 9pm.