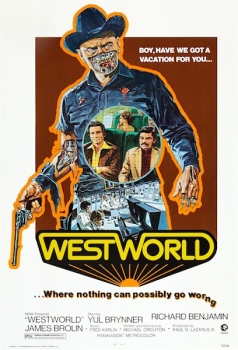 When writer-director Michael Crichton hit upon the notion of a theme park where the future-science star attractions broke free of their shackles and endangered the lives of the guests, it was so good it served him twice: he replaced the initial murderous AI-powered robot cowboys with rampaging genetically-engineered dinosaurs and sparked a multimedia franchise of enduring popularity. His first attempt hardly faded into obscurity, mind, bedding in as a minor sci-fi classic that HBO has now seen fit to reboot as a TV series, which premiered on Sunday in the US and debuts in the UK tonight. I think this new version may be most welcome, because Westworld has a great concept but, when it comes to the original film, that’s almost all it has.

Set in the near future, the film follows two friends (Richard Benjamin and James Brolin) as they visit an amusement park where you can live for a time in thorough recreations of either ancient Rome, medieval Europe, or the old West. It’s an immersive experience where you’re kitted out with era-appropriate clothing, stay in authentic lodgings, and the staff really believe it all — because they’re robots who’ve been programmed to do so, distinguishable from humans only by their imperfect hands. The film follow the chums through this process and the fun they have pretending to be gunslingers, though one of the robots (Yul Brynner, done up as the spit of his character from The Magnificent Seven) seems repeatedly antagonistic towards them, and, behind-the-scenes, the repair staff are baffled by some robots’ out-of-character actions.

Westworld doesn’t even reach the 90-minute mark, but even then there isn’t quite enough story to fill the running time. There’s a big dose of wish fulfilment in seeing Benjamin and Brolin getting to just enjoy the park — wouldn’t it be cool if this was real? Wouldn’t you want to go there? Though the price tag would put most people off: it’s $1,000 a day, which, factoring in inflation from 1973, means a two-week stay would now cost a little

under $76,000, or about £58,200. The potential threat of the robots malfunctioning is built up gradually here and there, in asides from what our ostensible heroes are up to, and isn’t explained. There are nods to the fact the human staff don’t actually know how the robots work, but why should that be? Some of them were apparently designed by other robots, but how did the designing robots come about? Rather than explore any of its science fiction themes, the film just uses the basic idea to have the robots go on a killing spree right at the climax. This is something Crichton definitely turned around for Jurassic Park, where how it was done is explained and debated… and then the creations go on a rampage. Best of both worlds, that.

So this is where there’s space for HBO’s new version. I haven’t read too much about it (avoiding spoilers ‘n’ that), but given the long-form needs of TV I’m presuming it’s going to dig into the science a bit more. Co-creator Jonathan Nolan has already demonstrated an interest in the whys and wherefores of artificial intelligence through his last TV series, Person of Interest (which I’ve discussed in several of my monthly TV overviews), so I’m presuming it’s going to take Crichton’s broad idea but then be a little bit Ex Machina: The Series as well. Sounds good to me. Maybe this will be a reboot that pays off, because while the original film does offer Crichton’s superb concept, plus a few straightforward action/suspense thrills, it’s too slight to really deliver on the inherent promise.

The new Westworld starts on Sky Atlantic at 9pm.

In “the near future”, Frank (Frank Langella) is an ageing jewel thief in denial about his dementia, contenting himself with visits to the local library, which is being taken over by a bunch of yuppies to turn into “the library experience”, and shoplifting from the beauty store that used to be his favourite restaurant. Concerned for his wellbeing, his son (James Marsden) gets him some home help in the form of a humanoid robot (voiced by Peter Sarsgaard). Initially reluctant to accept its presence, when the robot attempts to help by also shoplifting from the beauty store, Frank senses an opportunity…

Ostensibly a science-fiction movie, complete with futuristic-looking cars, a casual robotic presence, and glass-like tablets and smartphones, Robot & Frank is really a drama about, amongst other things, old age. The SF elements provide an interesting angle, of course, and this is a well-imagined very-near-future world (it was inspired in part by current attempts in Japan to develop robots specifically to care for the elderly), but the film’s joys and illuminations lie outside the sci-fi elements. Asimovian concepts of robot self-awareness/consciousness are touched upon, but they’re in service of one of the film’s central themes/stories rather than as an end to itself.

Where the film is most effective is in the friendship between Frank and his robot. Some have described it as a buddy movie, and while it doesn’t offer the rollicking action and humour that tag normally implies, it’s not a wholly inaccurate label. When Frank’s daughter (Liv Tyler) suddenly appears home halfway through and turns the robot off

(part of a half-realised almost-subplot about robot rights, or something), we not only feel Frank’s (temporary) loss of his friend, but also urge the film to turn the robot back on and get back to what’s really making the movie work. The event serves a purpose (it’s the point Frank realises he’s stopped just putting up with the damn robot and actually come to appreciate its presence), but still.

The heist elements, played up in some of the film’s marketing, probably to make it sound exciting, are actually rather low-key. Burglary would be a more accurate term. What I’m trying to say is, don’t expect Ocean’s Eleven with an old man and his robot sidekick. There are altogether different delights, including a wry sense of humour that surfaces rarely enough to lend the ‘gags’ extra emphasis but frequently enough to keep the amusement ticking over (avoid the trailer, it contains one of the best laughs). The emotional bond that develops is affecting, in the subtly-built way that you may not see coming. When the end rolls around, you may even feel a tear in your eye.

Robot & Frank is the kind of film that should appeal outside of apparent genre constraints — heck, the way technology’s going, it might not be that long before it’s just a straight-up drama.

Equally, this is of a branch of science-fiction we see all too rarely on the big screen, but which is fertile ground for those wishing to explore it: using fantastical concepts to explore and enlighten our own world. Even if you learn nothing revelatory about old age and the rigours of dementia, the friendship between the robot and Frank is reason enough to enjoy.

The UK TV premiere of Robot & Frank is on BBC One tonight at 11:15pm. It’s available on BBC iPlayer until 1:40am on Thursday 28th May.

Once upon a time, Real Steel would have been rated PG, been aimed at 7- to 10-year-old boys, and would probably have been quite the success. In the current Hollywood moviemaking climate, however, it’s rated PG-13, consequently aimed at teenage boys and grown men who still have the tastes of teenage boys, and seems to be regularly slated in online comment sections.

That’s a shame because, despite some corny and cheesy bits, it generally works. It begins by setting out some apparently predictable plots, but then several didn’t play out entirely as I expected (I mean, it’s hardly revolutionary, but it wasn’t quite as blatant as I was expecting it to be when it came to certain resolutions). The fights aren’t the most exciting robot action sequences ever put on film (or digital file), but are suitably punchy for their purpose. The final duel is perhaps not as triumphant as the filmmakers think it is, but I’ve seen worse.

Other bits falter more obviously: there’s some horrendously clunky exposition, and it’s so desperate to be set in the near future that its future-history is practically our present already, which undermines it to an extent. OK, it’s not high on realism, but when someone says, “ah, that’s a Generation 2 robot from 2014,” you just think, “well, this isn’t going to really happen, is it?”

Some things are also distinctly unresolved: just why was Evil Lady prepared to pay $200,000 for a no-hope junkyard robot? I figured there was going to be some Nasty Secret to come out, especially as there’d been hints of the robot having extra abilities… but no. And what was up with the kid being 11 but Jackman always thinking he was 9? Figured that was going somewhere too. There’s talk now of a sequel — I hope such random bits weren’t intended as elaborate seeding for a follow-up, because that’s just irritating. That said, it would be nice if whoever’s in charge spotted those things and built on them in the sequel’s story.

For all that online moaning I mentioned, to my surprise I haven’t seen anyone complaining about that oft-cited bugbear, product placement. It’s glaringly obvious at frequent intervals… but it’s also pretty well integrated into the world — no “mm, Converse All Stars, vintage 2004!” moments here. (Funnily enough, Dr. Pepper — which is fairly prominent, though not so much as other things — was used with permission, but wasn’t paid for by… whoever makes it. So it’s not product placement. So if you do ever see someone moaning about the product placement of Dr Pepper in Real Steel, you can tell them they’re a moron, or something.)

Real Steel is a good family movie, masquerading as a teenage-focused robot action blockbuster thanks to its 12 and PG-13 certificates. The true best audience for it will be those around the same age as the central kid: they won’t find him as annoying as older viewers will, and the whole robot fighting thing will just seem exciting.