Adapted from a lesser-known Daphne Du Maurier novel (previously filmed in 1952 with Olivia de Havilland, and here relocated from Cornwall to Devon to avoid comparisons to Poldark (really)), My Cousin Rachel is the story of an orphaned young man, Philip (Sam Claflin), who’s raised by his older cousin Ambrose until the latter’s health forces him to leave for Florence. There Ambrose falls in love with their cousin Rachel (Rachel Weisz) and marries her, but shortly after dies. His final letter to Philip implies Rachel may’ve had a part in his demise. When she arrives at their estate in England, Philip is determined to confront her, but soon finds himself entranced by her, as does everyone. Is she a scheming murderess intent on using her wiles to acquire the family’s estate, or did Philip’s imagination get the better of him?

That mystery is really the heart of My Cousin Rachel, which unfurls as a classy, lightly Gothic melodrama. It’s a puzzle that’s not so much investigated as gradually hinted at, leaving the audience to make up their own mind. It certainly was successful in having me change my opinion on where it was headed multiple times. The pace is fairly leisurely, which some reviewers have found to be trying; but while it’s certainly a slow burner, for me that was part of why it worked. The passage of time and the opportunity it grants for overthinking sways Philip’s mind hither and thither, and so the film gives the viewer similar space to think, for their opinion to shift, back and forth. It makes you a part of his paranoia.

Rachel Weisz is typically excellent, delivering a finely balanced performance that is at once charming and suspicious — is Rachel simply quietly enigmatic, or she hiding a scheming and deadly nature? Sam Claflin is very effective as the hot-headed, easily-led young man at the centre of the story, exhibiting these characteristics which sell Philip’s flip-flopping opinions, which could otherwise have come across as inconsistent. You can believe their passion of each other — or, certainly, his for her — which leads to some earthy bits that might surprise anyone expecting a quaint Heritage melodrama. Thrusting among the flowers aside, the overall style does evoke those Sunday evening costume dramas (you can see why they were wary of a Poldark comparison), as does the pretty photography by DP Mike Eley — it’s not the most outright gorgeous film you’ve ever seen, but it’s a bit of a looker.

My Cousin Rachel’s unhurried storytelling may put off some viewers, but if you settle into its rhythm then it’s a paranoia-fuelled guessing game that will keep you rethinking the truth up until its closing moments.

My Cousin Rachel is available on Sky Cinema from today. 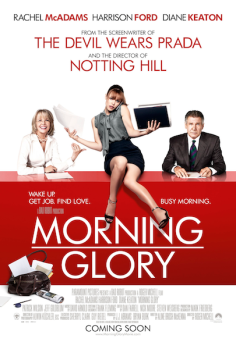 Rachel McAdams takes a break from time-jumping rom-coms to lead a film where the romantic subplot is merely tacked on, presumably for marketing purposes. Really, it’s about a woman in love with her job.

McAdams plays the producer of TV’s worst-rated breakfast show, but her dream career faces ruin when it’s scheduled for cancellation. If only she can persuade her hero, investigative reporter turned disgruntled host Harrison Ford, to toe the line…

Overlong, predictable, and not the sharpest newsroom-based comedy, Morning Glory’s likeable cast nonetheless carry it to a level of entertaining amusement. Not the disaster it’s been painted as.

Wannabe-prestige picture Hyde Park on Hudson is like two films playing at once: the dramatic/romantic story of President FDR’s (Bill Murray) burgeoning affair with his distant cousin Daisy (Laura Linney), and the comedy-drama of his meeting with King George VI (aka “the one Colin Firth played in The King’s Speech”; here, Samuel West) and Queen Elizabeth 1.5 (Olivia Colman) in the build up to World War 2, at a time when America really didn’t want to get involved.

This internal battle between the two plots — and, consequently, the ways in which the film was promoted — seems to have caused some confusion with viewers. The trailer (or the British one, at least) sold it as being about the UK/US culture clash, a four-hander in which the British monarchs met FDR and… some woman. See how the British poster is a three shot of Murray, West and Colman, while the American one makes it all about Murray with Linney behind him (and they retained those images for the DVD and Blu-ray releases, too). Understandably, therefore, British viewers seem to expect a film about the UK/US meeting, and are surprised to find the visit is a poorly-integrated subplot to a tale of FDR’s philandering, while US viewers seem to expect a film about FDR having an affair with his cousin, and are surprised by how much time is spent on a poorly-integrated subplot about a British state visit. 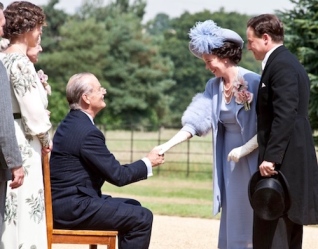 For what it’s worth, the film was born of the discovery of Daisy’s letters and diaries, which told of the relationship. Apparently the screenwriter was one of the people who found these, so I guess that’s where his interest lies. The film is a UK production from Film4, however, and made in the wake of the global success of The King’s Speech, so perhaps that explains the root of the royal involvement. While both stories have some potential, they aren’t made to gel, switching back and forth as if in some kind of narrative relay that enables the film to run a theatrical distance.

The screenplay doesn’t help the cast, either. West and Colman are quality actors, but they’re not given good enough material to work with — they’re little more than the funny-Brits comic relief. Their performances seem pitched as a cheap Sunday afternoon TV movie, and are further hamstrung by the inevitable comparison to Colin Firth and Helena Bonham Carter’s award-winning portrayals of the same people just a couple of years earlier. With the material they’re given, West and Colman never stood a chance of matching that standard.

Elsewhere, Murray gives a good performance, though equally he’s never afforded a scene to really dig into his character, to display some of his inner life. Linney is landed with an over-explanatory voice over, and a character who’s three steps behind the viewer.

Roger Michell’s direction is adequate if unremarkable. DoP Lol Crawley provides a few spots of nice cinematography during any scene set in daylight,

with vibrant colours evoking a place of sunny happiness, but anything set at night is graded with a terribly extreme, not to mention awfully rote, case of teal-and-orange.

While not strictly speaking a good film, Hyde Park on Hudson is passable as a Sunday-afternoon-style period drama (albeit one with an occasional risqué edge). One wonders if it could’ve been something more, somehow.

Hot-shot lawyer Ben Affleck and down-on-his-luck Samuel L. Jackson are involved in what Americans like to assonantly call a fender bender, making the latter miss a custody hearing and the former lose an important document worth millions… which Jackson happens to pick up. Cue a game of tit-for-tat retaliation, as Affleck tries to recover the file by ruining Jackson’s life further, and an increasingly-desperate Jackson enacts increasingly-violent revenge.

I don’t know if Changing Lanes was aiming to be a state-of-the-nation thriller (it was made a good few years before the financial collapse, after all) or just a character drama, but either way, the storyline is a mite too implausible, and the ending — where everyone suddenly realises The Right Thing To Do — is rather pat (apparently it replaced a more combative finale that test audiences didn’t like). These factors are only emphasised by the fact it supposedly all takes place in one day. The characters’ taxi bills must’ve been enormous…

Jackson and Affleck give good performances, all things considered, with each treated to worthwhile (if commensurately obvious) speeches. As Affleck’s wife, Amanda Peet appears for one strong scene, though some other cast members — I’m thinking specifically of William Hurt as Jackson’s AA sponsor — are rather wasted. Also, for a film I still thought of as rather recent (my error — it’s 13 years old), it feels quite dated — I mean, it’s shot on film! Despite being released in April 2002 in the US, and not until November over here, they left in a shot of the Twin Towers (apparently they were initially removed with CGI, then it was decided to leave them in as a tribute. Considering they appear for a sole, fleeting glimpse in the middle of a montage, in a shot that doesn’t even feature any of the cast, 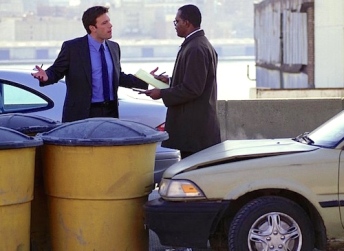 I don’t know why they bothered). The worst offender is David Arnold’s score — all turn-of-the-millennium club-y electronic-drum-kit-y beats, for a character-driven drama/thriller? Ugh.

Changing Lanes isn’t a bad film, it just doesn’t feel like the best realisation of a concept that has some potential.

Finally unpacking & sorting my DVDs & Blu-rays has led me to notice this inexplicable fuck up in the UK #Ghibli releases’ numbering 🙄🥺 . . . #arrietty #laputa #castleinthesky #6 #bluraycollection #bluray
Unpacking my #DVD & #Bluray collection to its new home, realised I’d completely forgotten about the OTHER #WW1 movie starring George MacKay. . . . . #PrivatePeaceful #1917 #GeorgeMacKay #WorldWarOne #MichaelMorpurgo #bluraycollection
Needed a complete change of pace for my second film this evening, and you don’t get much further from The Nightingale than #JohnnyEnglish...
“Welcome to the world, boy. Full of misery from top to bottom.” This film is A Lot. You don’t get so many 18s nowadays, but woah, does #TheNightingale merit it.