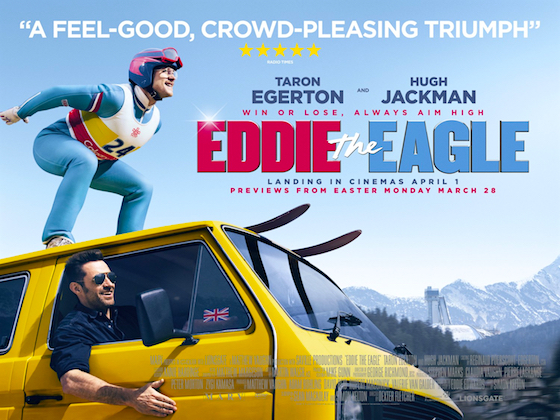 The unlikely hero of the 1988 Winter Olympics — ski jumper Eddie “the Eagle” Edwards — gets the Cool Runnings treatment in this comedy-drama. I make the Cool Runnings connection because, firstly, they’re both about unlikely competitors in the Winter Olympics (from the same year, in fact — what was in the water in ’88?!); and, secondly, because in their transition to the big screen they were both heavily fictionalised.

The story, at least as it goes in the film, sees young Eddie (played as an adult by Kingsman’s Taron Egerton) keen to participate in any Olympic sport, eventually settling on ski jumping because no Brit has participated in it for six decades. Disavowed by the British officials, he heads off to Germany to train himself. Trials and tribulations ensue that are by turns hilarious and heartwarming, but which eventually see him qualify for the 1988 Olympics — that’s not a spoiler, it’s why he’s famous!

Helping Eddie along his way is Bronson Peary (Hugh Jackman), a washed-up former US ski jumper who begrudgingly becomes Eddie’s coach, transforming the Brit from a no-hoper to someone who’s… not entirely bad. This is probably the film’s biggest whopper, because Peary didn’t even exist. It’s kind of brazen to make your co-lead and major subplot 100% fictional in a ‘true story’ film, isn’t it?

But, hey, this isn’t a documentary — it’s a feel-good underdog story, about having a can-do attitude and dedication to your dreams in the face of adversity. It’s also about how it’s not the winning but the taking part that counts, in a very literal sense. That probably makes the film sound more twee than it is, but it’s not a grittily realistic take either — it’s a colourful, light, entertainment-minded film. It’s a good pick for Egerton too, getting to stretch different performance muscles than in Kingsman as our naïvely optimistic hero. Jackman makes for an easygoing co-star, getting to mix his Wolverine loner gruffness with a dash of his chat-show charm.

Eddie the Eagle is a thoroughly charming little film. Even if its tone and overall narrative may be familiar, it navigates them with a light touch and consistent good humour that — much like the eponymous Olympian — wins you over, even if it’s in spite of yourself. 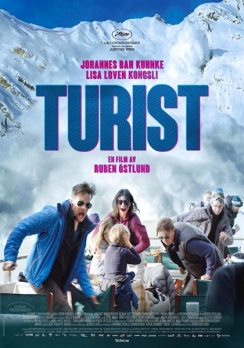 During a near-miss on a skiing holiday, a dad abandons his wife and kids. Cue days of passive-aggressive familial angst.

Other times, it’s too languorous and arthouse-y for my taste. Compare Rotten Tomatoes to viewer opinions elsewhere and you see a fissure in opinion Maybe removing some longueurs would’ve made it something regular viewers could enjoy as much as critics.

Force Majeure is available on Netflix UK as of last Sunday.

This drabble review is part of the 100 Films Advent Calendar 2015. Read more here.

Just arrived 😁
Ordering direct from the publisher sometimes has its perks.
Hunky boy has finally made it to the UK 😁
Newest addition to my #bluraycollection: the #HMV Cine Edition of Gareth Edwards’ #GODZILLA, in #4K #UltraHD 😁