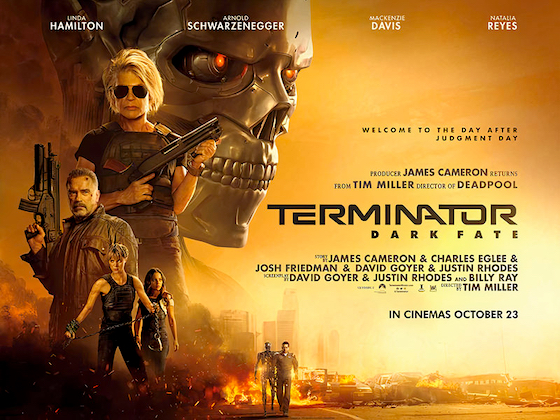 “I’ll be back,” the Terminator famously said in The Terminator, and he has been proven right — again and again. And again. This may be a franchise about time travel, but it’s us who seem to be stuck in some kind of time loop, because this is now the third attempt at creating a direct sequel to Terminator 2. For those keeping score, the first was literally titled Terminator 3; then there was TV series The Sarah Connor Chronicles, which picked up from T2 (pretending T3 didn’t exist); and now this ignores them both. It also ignores the other attempts to keep the Terminator franchise alive: Salvation, which actually continued the storyline on from T3 (albeit with an entirely new cast); and Genisys, which attempted to be both a sequel and a reboot.

As well as being the third Terminator 3, Dark Fate is also the third attempt to start a new trilogy (Salvation and Genisys both arrived with such lofty plans), and is now the third to see those plans aborted after poor box office. Salvation made just $125.3 million at the US box office and $371.4 million worldwide — big numbers, but not when your movie cost $200 million. Hence starting again with Genisys — but that was an even bigger flop at the US box office, taking just $89.8 million. Worldwide, it took a respectable $440.6 million (more than Terminator 3, even), which, off a lower budget of $155 million, is pretty good. But US studios continue to struggle to see beyond their own borders, and so that trilogy was abandoned too.

Both of those movies tried something new for the franchise. Salvation took us into the Skynet-ruled future, something the previous movies had only had as a threat to be averted. Genisys played more with the idea of time travel, taking us back into the timeline of the first movie, but different. Now, Dark Fate explicitly wipes out previous continuity, beginning with a flashback that directly follows on from T2 but sets us on a new path, introducing new heroes and villains, alongside the return of the original Sarah Connor, Linda Hamilton (who was written out of T3 and recast in Chronicles and Genisys). Surely that would solve the box office problem? No: it took $62.3 million in the US and just $261.1 million worldwide, the worst yet by any measure. 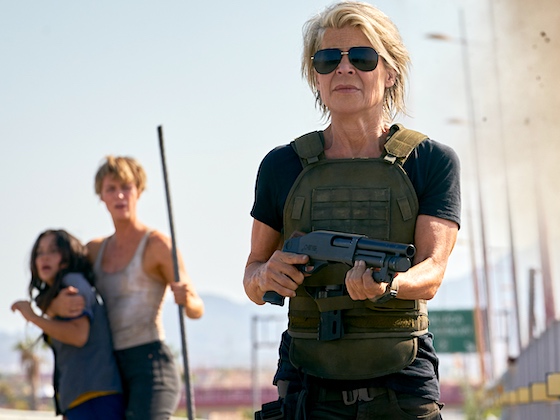 Box office is not indicative of quality, of course, but audience reception of Dark Fate hasn’t been any better than previous attempts to continue Terminating: if you look at IMDb scores, Dark Fate has 6.2 to Genisys’s 6.3, while Salvation has 6.5. None of them are stellar, but all are solid; and, with hindsight, suggest the producers should’ve just stuck it out with one of the previous versions. Indeed, I think trying to sell Dark Fate as “another restart” probably just put more people off. The Terminator franchise has become such a tangle of forgettable messes, aborted plans, and “this is a sequel to X but not Y”-type ventures that, for your average cinema-goer, it’s easier to just ignore it than engage with what counts and what doesn’t.

All of which is to review the film’s box office performance rather than the movie itself. But I’m more or less with IMDb voters on this one: the behind-the-scenes story is almost more interesting than the film itself. Not that it’s a bad movie, but it’s little more than a serviceable sci-fi action-adventure flick, hobbled somewhat by a palpable sense of desperation to emulate the cultural impact and success of Terminator 2. That’s the real reason none of these continuations have been allowed to stick: because none of them equalled T2. Such a goal is a hiding to nothing; a fight you stand almost no chance of winning. T2 is regarded as a Great Movie; a seminal entry in the sci-fi and action genres; influential and beloved. Thinking you can equal that is like making a gangster movie with the view that “if this isn’t regarded as at least equal to The Godfather, I have failed.” You’re setting yourself up to lose. In Terminator’s case, they’ve had that loss three times in a row, with ever-diminishing financial returns, to the point where anyone setting out to make Terminator 7 is going to be looked on as mad. What do you do with it now? You can’t reboot it again! But nor can you reasonably make a sequel to any previous version. They have, literally, killed the franchise. (Well, they probably haven’t — someone will almost inevitably continue it someday — but it’s going to be harder than ever to persuade anyone to finance that.) 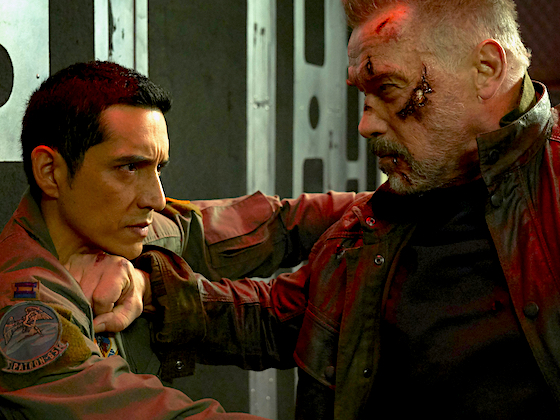 Perhaps some form of spin-off will be seen as the next thing to try, but — spoilers! — that’s basically what Dark Fate tries to kickstart. Sure, Schwarzenegger and Hamilton are here, and the events of T2 are directly referenced and continued; but Skynet is no more and there’s a new war to fight. On the bright side, with a new future, a new threat, and an apparent aim to transition from old characters to new ones, it doesn’t feel stuck on the merry-go-round like the previous sequels did. It’s at least trying to move on in a (slightly) new direction, rather than just rehash the familiar. The problem (and it has been a big problem for some fans) is that by abandoning certain key tenets of the franchise (John Connor being the ‘Chosen One’; Skynet), it doesn’t feel so much like Terminator 3 as Terminator: The Next Generation. But, hey, that worked for Star Trek! After so many sequels that tried to find new angles to rework familiar bits and bobs, isn’t it about time someone tried something new, even if it’s in a very similar mould to what came before?

Well, it’s a moot point now, because Dark Fate Part 2 ain’t happening. We can only take some small measure of solace in the fact that it isn’t as open-ended as Genisys was; and that, whatever any other filmmaker tries and fails to achieve with this franchise, we’ll always have Terminator and T2.

Terminator: Dark Fate is available on Sky Cinema and Now TV from this weekend.