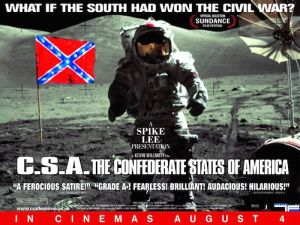 Mockumentary about the history of America had the South won the civil war.

While an intriguing idea, in practice it’s disappointing. Apparently such a victory would have led to everything the nation did since being in order to maintain slavery. There are some neat ideas (a Cold War with Canada) and some genuinely amusing or cleverly satirical bits, but the focus is too narrow and, consequently, unbelievable and sometimes dull. It also seems unable to break away from reality far too often: Wall Street still crashes, JFK becomes President and is assassinated, etc.

The acting is frequently dodgy and it all has a very amateurish feel. To top it off, considering it’s pretending to be a British documentary, the style is too like cheap American TV documentaries.

All in all, a disappointment.

C.S.A. featured on my list of The Five Worst Films I Saw in 2007, which can be read in full here.