It’s 40 years this month since Ridley Scott’s debut feature appeared in British cinemas, which perhaps makes now the most appropriate time to have awarded him the BAFTA Fellowship (as he was this past weekend, of course).

Adapted from a short story by Joseph Conrad, which was itself inspired by a true story, The Duellists stars Keith Carradine and Harvey Keitel as a pair of soldiers in Napoleon’s army who, for reasons only properly known to one of them, end up fighting a series of duels — or, really, one duel constantly reignited — over the better part of two decades. They become renowned for it (Conrad discovered the story through a newspaper article noting the death (by natural causes) of one of the real-life pair), to the chagrin of Carradine’s reluctant duellist. He dreads every potential encounter, aware of the fight’s futility and danger, but honour keeps drawing him back.

Ultimately, honour and the futility of fighting are what The Duellists is most about, if it’s about anything — if you like, you can enjoy it as merely a series of well-staged combats between two men, each stubborn in their own different way. They also each have slightly different ideas of honour, it would seem, but they’re compatible enough that it keeps drawing them back to the fight. “Acting with honour is all well and good,” the film seems to be saying, “but look where it gets them.” It doesn’t completely ruin their lives, but it does take a serious toll. A bit of common sense goes a long way, and acting with so-called honour, which might seem to be the moral course, doesn’t actually involve a great deal of common sense.

Scott also intended the pointless, never-ending fight to represent a microcosm of war. Speaking to Empire magazine, Scott described Conrad’s story as “a very nice pocket edition of the Napoleonic Wars” because it “somehow encapsulated the craziness of an argument and how at the end of a 20-year period one of them forgot the reason why they were fighting. Isn’t that familiar?” Fighting for fighting’s sake; not wanting to be the one to back down… it seems it’s human nature, just as much in a conflict between two men as in between two nations. A bit of common sense would go a long way…

The other aspect of the film most worthy of comment is its photography. Reportedly Scott set out to imitate Stanley Kubrick’s Barry Lyndon, released just a couple of years earlier. It’s an appropriate inspiration: both tales are set in the same era, and Lyndon looks incredible. Scott undoubtedly succeeds in his goals — both that of copying Kubirck’s visuals and that of such copying being a good idea: much of The Duellists looks gorgeous, particularly wide scenery shots. Although the cinematography is credited to Frank Tidy, Scott says he operated the camera himself for the entire shoot, so who’s to know where exactly the credit for that achievement lies. 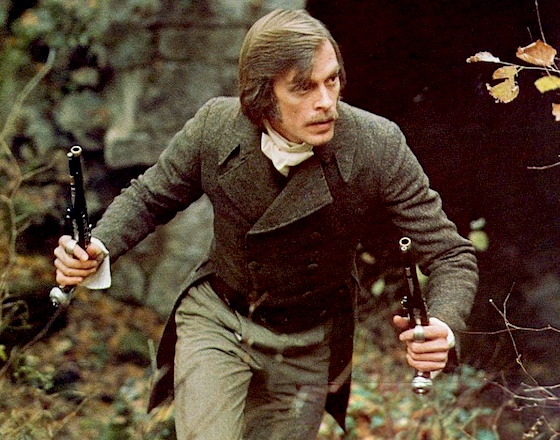 Resemblances to Barry Lyndon extend beyond just the visuals, mind. As noted, it’s set in the same era, so various visual trappings are similar, from costumes to some of the locations — if not direct copies, they certainly evoke Kubrick’s film more than once. There’s also the story itself: a tale focused on just one or two characters but spanning decades, and during a particularly tumultuous and eventful period in history. As Tim Pelan puts it (in this piece at Cinephelia & Beyond), “while Barry Lyndon advances with the forward momentum of one of Napoleon’s columns in its telling of a fool’s misfortune and slow glide towards the destruction of all he worked for and holds dear, The Duellists dashes pell-mell between the very different clashes of the antagonists.” Scott’s film feels like it thinks it is, or wants to be, an epic, just like Lyndon, even though it only lasts a little over 90 minutes.

Comparisons to such a lofty cinematic success would damn a lesser film, but The Duellists is a very fine work in its own right. Despite the similarities I’ve highlighted, it’s really a very different film: Barry Lyndon has a kind of leisurely elegance, whereas The Duellists is more economical and straightforward. It’s certainly not Scott’s greatest film (his next two immediately put paid to that), but it’s perhaps his most under-appreciated one.