Hercules and The Emperor’s New Groove are connected by two things: firstly, they’re among the first Disney films I didn’t see because I’d Grown Up; secondly, I’m not sure I’d’ve wanted to see them anyway because I always thought they looked rubbish.

In truth, I think the second factor was more powerful than the first, because I’ve always liked the Disneys I liked — I don’t actually remember a time when I felt I’d grown out of them, just a time when I didn’t watch them.

Finally seeing this pair now, I find that my expectations were surprisingly flouted in one case, and sadly vindicated in another. But you’ll have to read on to see which is which…

“It suffers from songs that are at best unmemorable and at worst irritating. The gospel-styled Greek Chorus sing dreadful dialogue, while Hercule’s big song is like a wimpy first draft of Mulan’s… [The] love interest gets a passable song, not that I can remember it now… [but] it looks great in HD.” – Read more…

“There are some good bits like the sequence at the diner, or a lot of Kronk’s stuff… The villains are a delight. It’s hard to hate them when they’re somewhat wronged and more pleasant to spend time with than the hero… [and it] again looked nice and crisp in HD.” – Read more…

When I said “you’ll have to read on to see”, I meant the full reviews. These quotes may be (deliberately) misleading…

Disney’s 40th (canonical) animated film had a very troubled production, which, from what I can tell, turned it from a derivative riff on The Prince and the Pauper into this load of tosh.

The ‘hero’ — the titular emperor, Kuzco — is thoroughly irritating, and we have to suffer him in voiceover narration as well as on screen. OK, the film’s aware he’s irritating, that’s the point, and he has a Journey that leads him to become Good and Nice and all that moral palaver; but so does, say, the Beast, but that film doesn’t try to force him on us as the central identifiable character. New Groove has a Belle-equivalent pre-installed — moral family-man villager Pacha, the ‘buddy’ in this ‘buddy movie’ — and perhaps if the story had followed him it would have more success in the likability stakes.

The villains, by comparison, are a delight. The problem is, while we ‘love to hate’ the likes of Scar or Gaston, here we just ‘like’ scientific ex-advisor Yzma and her nice-but-dim henchman Kronk. It’s hard to hate them when they’re somewhat wronged and more pleasant to spend time with than the supposed hero. It’s not that I wanted them to succeed in killing Kuzco, more that I didn’t care whether they did or not.

There’s one song, and it’s not particularly good. Not that a Disney film has to be a musical but, well, most are, and it’s not as if the rest of the film is strong enough to support their absence. Much like Hercules, I’d always perceived this to have a nasty squared-off animation style. 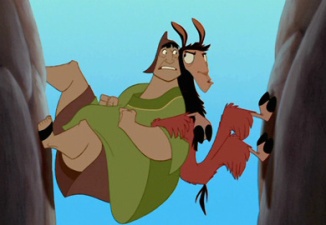 In reality it doesn’t suffer from that too much, and again looked nice and crisp in HD. I usually ignore image quality when it comes to reviews — not that I don’t care, but in these reviews I’m aiming to look at the content of the film rather than the particular copy I watched — but HD has such noticeable benefits for animation (when done well).

There are some good bits tucked away — like the sequence at the diner, or a lot of Kronk’s stuff (it’s easy to see why he was chosen to lead the straight-to-DVD sequel), or a good chunk of the climax — but there’s not enough to make up for the rest.

Somehow, it holds a decent score on both viewer-rated IMDb and critic-rated Rotten Tomatoes. This surprised me for two reasons: one, I thought it had gone down badly; and two, it deserved to go down badly. No pleasant surprises here — The Emperor’s New Groove is as weak and irritating as the title.

The Emperor’s New Groove featured on my list of The Five Worst Films I Saw in 2010, which can be read in full here.