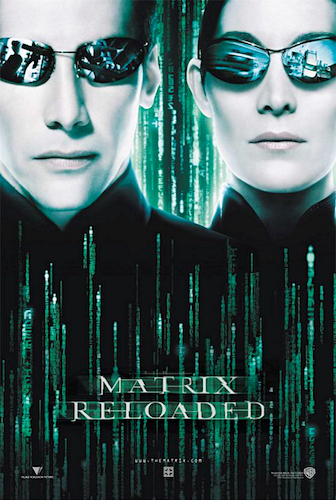 The Story
With just 72 hours until the machines arrive to destroy mankind’s last city, all ships are ordered to return home for its defence. But Morpheus still believes the answer to their salvation lies in the Matrix itself and what Neo is meant to do there.

Our Heroes
Neo is just a man, but within the Matrix has abilities and power beyond any other. As he journeys deeper in the fake-world’s workings, can he free mankind? Will his love for fellow freedom fighter Trinity get in his way? Is their captain, Morpheus, misguided in his belief that Neo is The One?

Our Villains
As hordes of machines drill down to the human city of Zion, a more pressing threat is Agent Smith, who has found a way to multiply himself and is on the warpath within the Matrix, with his sights set on Neo.

Best Supporting Character
The Merovingian is a snobby Frenchman (is there any other kind, ho ho) who holds prisoner a key program our heroes need access to. First, they’ll have to endure his philosophising; after, they’ll have to fend off the men he sends to kill them.

Technical Wizardry
See above. The logistics of filming the sequence are mind-boggling. Now they’d just throw it all together in a computer with a bit of green screen for the actors, but back in the early ’00s they built a massive stretch of freeway and filmed most of the practical stunts for real — and it’s all the better for it, of course.

Truly Special Effect
Some of the CGI is a little ropey 15 years on (though the digital body doubles looked just as bad at the time as they do now, to be honest), but all of the real-world stuff with Zion and its ships still looks fantastic.

Letting the Side Down
Depending on your point of view, the climax is either philosophically engaging or impenetrably incomprehensible. I feel like repeat viewings and time have made it more understandable, but it’s still suffused with more big ideas than people expect to find in their blockbuster movies.

Making of
“The Matrix Reloaded” is a funny title when you think about it. I mean, it’s very much “from our perspective” — in the film’s world the Matrix has never stopped running, so it’s not being reloaded; it’s an allusion to computer-y stuff and the fact this is a sequel, nothing to do with the actual content of the film. Though I guess it’s not really any weirder than just sticking “2” on the end or whatever, so…

Previously on…
In 1999, sci-fi actioner The Matrix blew everyone’s minds. In the run-up to this sequel there was also The Animatrix, a series of anime short films that explained some of the backstory to the films’ world and detailed certain events that occurred between the first film and its sequels.

Next time…
The video game Enter the Matrix occurs alongside Reloaded, featuring characters and situations from the film in a parallel storyline. It included around 45 minutes of live-action scenes shot by the Wachowskis, which has since been made available on the film’s DVD/Blu-ray/etc releases. Later the same year, The Matrix Revolutions concluded the trilogy, while MMORPG The Matrix Online continued the story. There have also been other video games and some comic books, but for a modern media franchise it’s been quite tightly controlled beyond that.

The Matrix sequels are generally viewed as a big disappointment, which isn’t wholly accurate or fair (for one thing, this first sequel actually has pretty solid ratings online, from both critics and viewers). It was always a big ask to follow-up a movie as original, groundbreaking, and straight-up entertaining as the first Matrix, and that the Wachowskis chose to do so by doubling down on the mythology and underpinning ideas obviously wasn’t successful with too many people. So perhaps making the plot 50% a straightforward quest-against-time narrative and 50% impenetrable philosophy lectures wasn’t the best idea, but the action sequences are still absolutely stunning. And, actually, if you bother to engage with the film on its own level, there’s some interesting stuff here.