A fresh perspective on Charles Dickens’s favourite of his own novels, from co-writer/director Armando Iannucci, best known for sitcom The Thick of It, its spinoff movie In the Loop, and The Death of Stalin.

Those are all political satires, of course, whereas David Copperfield is more of a shaggy dog story; though its attracted some degree of ‘political’ commentary thanks to its colourblind casting. So let’s get that out of the way first. Not every character here is played by a white actor. Is every character in Dickens’s novel white? I dunno, probably. Is it unrealistic to have people of colour in a story set in Victorian England? Well, considering England was at the heart of a worldwide empire with global trade links and had been through the slave trade, I would guess not everyone in the country was white by that point. I’m no expert on this, but I’ve certainly seen comments by experts that would agree with that.

Now, all of that said, David Copperfield’s attitude to casting is the most genuinely colourblind I’ve ever seen — it’s not concerned that related characters have ‘plausible’ similar skin tones, even. It seems Iannucci has just cast whichever actor he felt was right for the role. I guess that’s going to prove an insurmountable barrier to some people; too great an ask to accept the ‘reality’ of the story. Whereas a giant hand crashing through a ceiling to pluck little David from comfort, well, that’s just dandy. Anyway, I’m already getting bored with this debate and I’ve barely written about it. If it bothers you, I don’t think it should, but hey, you do you. For the rest of us, we can just get on with enjoying everything else the film has to offer.

And that’s quite a bit. Dickens’s novel is a thick tome (768 pages, as per the film tie-in edition), and here it’s been condensed briskly into just under two hours, so there’s a lot more going on than the colour of people’s skin. It’s a semi-autobiographical tale, and Iannucci emphasises that side of it by framing it as David telling his own story at a staged reading. Such a framing device also allows for some flights of whimsy in the film’s treatment of certain things, especially scene transitions, but to say too much of those would destroy some delightful surprises. Trust that Iannucci is doing more than just showing off or messing around, however, instead establishing a style that allows for a neat twist or two later on.

I don’t know how thoroughly the film adapts those 768 pages, but it feels like it’s trying to cram in as much as possible. It rattles by at a whipcrack pace, which is both one of its greatest assets, because it moves like the clappers, and its biggest drawbacks, because it winds up feeling a bit too long. Every time you think it’s getting to the end, there’s another bit. (Maybe this is less of a problem if you’re familiar with the whole story, which I was not.) This is a minor complaint, though, because while those 119 minutes may be a few more than seems strictly necessary, what’s within them is frequently riotously funny. I saw the film with an almost-full house, and it was clear everyone was having a whale of a time.

The same appears to be true of the cast. I suppose Dev Patel is best known for heavier stuff, like Slumdog Millionaire (though that was 12 years ago now (jeez)) and Lion, but here reminds us he’s adept at lighter material too (which shouldn’t surprise anyone who’s seen the Marigold Hotel films). Elsewise, the extensive and sublime supporting cast vie for attention in an array of standout performances. For my money the winner (if we must pick one) is Hugh Laurie as the flighty but unfailingly kind Mr Dick. Plus it’s quite nice (or you could say “nostalgic”) to see him back in bumbling toff mode after years of things like House and The Night Manager.

Not that the others don’t get their moments to shine — when you’ve got the likes of Tilda Swinton, Peter Capaldi, and Ben Whishaw involved, you’d expect nothing less. I could go on listing recognisable names, for there are plenty here, but you can always just read the cast list for yourself. One of the most noteworthy is Morfydd Clark in a dual role, one of which likes to mainly talk through her dog. I suspect this may be another stop on her path to stardom — she was recently seen in the BBC’s Dracula and a small-but-memorable role in His Dark Materials, and has been cast as Galadriel in Amazon’s Lord of the Rings series.

So there’s a lot of talent on screen, but it takes that degree of skill to negotiate the tone Iannucci has set: a narrative full with comedy, but that doesn’t lose sight of an underlying heart. Indeed, the degree of humour is a welcome counterpoint to the machinations of the plot, which contain an array of miseries when looked at objectively — death, loss of home, betrayal, and so on. This is again perhaps where that framing device comes into play, setting the story as a man finding the (sometimes dark) humour in the list of tragedies that have befallen him, as well as his friends and family. David’s predilection for storytelling is an important throughline, and the film’s affection for the emotional power of the act of writing is sure to make it a favourite for many authors (and wannabes).

The Personal History of David Copperfield is in UK cinemas now. It’s released in the US on May 8th.

I’ve never been to a film festival before. The expense and organisation of travel and accommodation, battles for tickets and/or never-ending queues for entry, racing to dozens of screenings a day… it’s just not my thing. (I don’t know if major festivals are really like that, it’s just an impression I’ve picked up from attendees on social media, etc.)

But when there’s a film festival one stop on the train away from your house, well, you can’t say “no”, can you? (Doubly so when you work for said festival and get comp tickets…)

FilmBath Festival isn’t among your Sundances or your Canneses or your Venices or your Londons. Nor is it one of those festival that just specialises in one thing, like documentaries or shorts. There are no red carpets or world premieres; no overtired critics trying to review 5,000 films every day or websites setting up media centres to churn out slightly stilted YouTube interviews with cast and crew desperate to promote their movie. Instead, it’s a local festival giving local people a chance to see previews ahead of general release; films that have already been released but didn’t make it to one of Bath’s cinemas; and smaller, interesting movies that might be difficult to see at all outside a festival.

Yesterday’s opening night kicked off the festival with a double bill of the first of those, including an exciting late addition to the lineup — so late it didn’t even make the brochure. (Ooh, look at all the beautifully precise punctuation and spelling and whatnot in that brochure! What geniuses must have worked on such a thing!) I saw both films, and I’ll write full reviews nearer their wide releases, but for the time being…

First up was The Report, an All the President’s Men-style thriller about the investigation into the CIA’s use of torture post-9/11. It’s written and directed by Scott Z. Burns, who’s probably best known for writing a handful of Steven Soderbergh movies, plus contributing to arguably the best Bourne movie and Daniel Craig’s final Bond film. At the centre of the story is Star Wars’s Adam Driver as Daniel J. Jones, the senate staffer tasked with combing through millions of pages of secret documents to find the truth. As if to highlight the significance of the story, there’s an all-star supporting cast, led by Annette Bening and Jon Hamm, plus Michael C. Hall, Maura Tierney, Tim Blake Nelson, Matthew Rhys, Corey Stoll, Ted Levine, Jennifer Morrison, and several other recognisable faces. It’s a methodical and gripping film, seemingly as dedicated to explaining the truth as is its protagonist. Imagine if we lived in a world where this was the R-rated war-related true story that became the year’s highest-grossing film at the US box office (as opposed to the one that was). 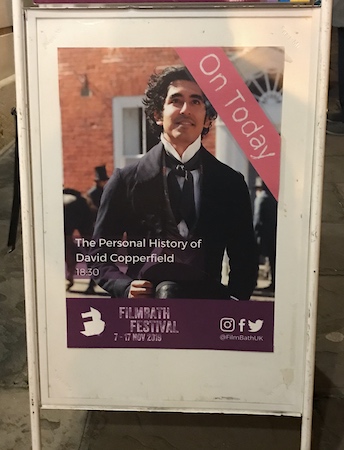 Next, that late addition: Armando Iannucci’s new adaptation of Charles Dickens’s The Personal History of David Copperfield. It’s got another all-star cast, headed by Dev Patel as the eponymous young man. Obviously such colourblind casting has provoked comment, and I guess some people won’t be able to get over that, but it doesn’t matter. Dickens’s novel is a thick tome, here condensed briskly into two hours, and there’s a lot more going on than the colour of people’s skin. Its whipcrack pace is both one of its greatest assets (it moves like the clappers) and its biggest drawbacks (it winds up feeling a bit too long). But it’s frequently riotously funny, and the namey cast are sublime, including (deep breath) Tilda Swinton, Hugh Laurie, Peter Capaldi, Ben Whishaw, Gwendoline Christie, Anna Maxwell Martin, Benedict Wong, Paul Whitehouse, Nikki Amuka-Bird, Aneurin Barnard, plus many other faces you might recognise depending how much British TV you watch. Plus, its affection for the emotional power of the act of writing is sure to make it a favourite for many authors (and wannabes).

Two completely different films, then, but both very much in my wheelhouse — as I said, I’ll review them later, but I enjoyed them both immensely. An exceptionally strong opening to a festival that promises many more delights (Jojo frickin’ Rabbit!) to come.

FilmBath Festival continues until 17th November. For information about what’s screening and to buy tickets, look here. You can also follow me on Twitter, Instagram, and/or Letterboxd for timely updates about what I’m seeing.