The writer-director and star of In Bruges re-team for the former’s sophomore feature; and if that doesn’t sound oddball enough for you, the lead cast is rounded out by Sam Rockwell, Woody Harrelson and Christopher Walken. Zaniness is sure to ensue.

Colin Farrell is Marty, a screenwriter struggling with his new work (all he has is a title). Rockwell is his best friend, Billy, who kidnaps dogs and then returns them for the reward money. Walken is Hans, his associate in this enterprise, whose wife is dying of cancer. Harrelson is Charlie, a violence-inclined mob boss who loves his Shih Tzu, Bonny… which brings trouble to everyone’s door when Billy dognaps her (of course).

So, the inciting incident is Billy taking the Shih Tzu. The film’s US tagline was, “They Won’t Take Any Shih Tzu”. I get the pun, but c’mon, there must be a version of it that makes sense!

The film itself is similarly laden with decent ideas that somehow just miss the mark. It feels sloppily told — not badly made, but awkwardly put together. There are some hilarious bits scattered about, which do at least make it feel worthwhile, but in between there’s so much darn filler. It needs a good trim. Heck, it needs a good structure. Writer-director Martin McDonagh seems to think he can get away with this, and plentiful other storytelling oddities, 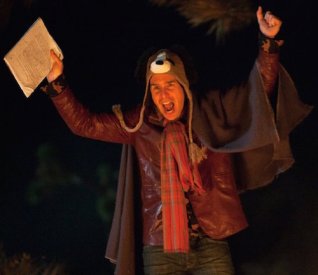 mainly via references to Farrell’s endeavours to pen a movie called, you guessed it, Seven Psychopaths. One wonders if there’s a hefty dose of autobiography in the writer’s struggle…

Perhaps this explains why McDonagh has produced a screenplay that feels kinda dated — with its talkative characters, violent crime story, and irreverent humour, it’s all very post-Tarantino. 20 years on from Reservoir Dogs, isn’t it time for something else? As Hans puts it when they’re all striving to improve Marty’s screenplay, “You’re the one who thought psychopaths were so interesting. They get kinda tiresome after a while, don’t you think?”

Seven Psychopaths has its merits — some bits are very funny indeed, even if they’re fleeting — but your tolerance for shaggy dog stories will determine how much enjoyment you get out of it. As a follow-up to the genius of In Bruges, it’s nought but a disappointment.

The UK TV premiere of Seven Psychopaths is on Channel 4 tonight at 10pm.