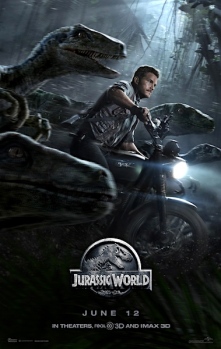 22 years ago, Jurassic Park was the first film I saw at the cinema. I was still of an age when all boys seem to find dinosaurs awesome, and of course everyone was talking about this spectacular film and its groundbreaking effects. Plus it was from Steven Spielberg — it feels daft I’d’ve known that at the time, but I was already a certified fan of the Indiana Joneses, so maybe. Either way, I was suitably awestruck, and have always been a little pleased my first big screen experience was such a good movie.

It seems now that I’m of a generation which has secretly held Jurassic Park in a level of esteem that earlier generations had for, I don’t know, Star Wars, maybe. Secret, that is, until Jurassic World came out this summer and, quite to everyone’s surprise, blew all predictions out of the water with the largest opening weekend gross of all time, both in the US ($208.8m) and internationally ($315.6m), totalling the first time a film grossed more than $500 million in one weekend. It ultimately passed The Avengers to be the third highest-grossing film of all time, taking in 40 days what the Marvel team-up needed 133 to achieve.* It was largely well-reviewed too, albeit with some dissenters, so it had a lot to live up to.

For me, it met that watermark. Okay, the plot is fundamentally a rehash of the first movie, but the devil is in the details, and in my book Jurassic World does enough new to shrug off any kind of “stealth remake” allegations. What it does definitely retain is a faithfulness to the Spielbergian tone of the first movie — a stated goal of director/co-writer Colin Trevorrow, and one I feel he’s absolutely pulled off. There’s adventure, humour, a sense of scale and wonder. Even the music’s right: in the same way his theme to Star Wars is the herald of a classical epic, and his theme to Indiana Jones is a call to adventure, John Williams’ equally-peerless theme to Jurassic Park is an ode to wonder, and composer Michael Giacchino deploys it wisely here, saving it for key moments when that sense of 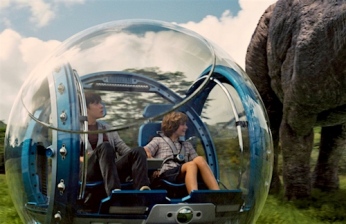 awe is front and centre once again. Even some of the film’s ‘problems’ aren’t, in my eyes. Does it spend too long wandering around the park before the big action starts? Not for me… which I guess is a viewpoint that comes with all the caveats of my opening paragraph. I rather suspect this is a movie that was very literally made by fans, for fans.

In that respect, I saw Jurassic World as a movie that was eager to please its audience. It may not always fully conform to logic, and some of its plot developments may be a little far-fetched for some, but it’s been crafted in a way that’s designed to tickle the fancy or scratch an itch among a spectacle-and-fun-seeking blockbuster audience. Sure, the film was greenlit to make loadsa money — what sequel (heck, what film) isn’t — but that doesn’t mean the people who were actually writing, directing, filming, designing, CGI’ing, and everything-else-ing the movie didn’t have pure intentions. Goodness knows how Trevorrow — whose sum total previous directorial experience is an overrated indie rom-com with a vague, underdeveloped sci-fi element — landed this gig, but he does a bang-up job with it. No wonder they’ve given him the keys to a Star Wars saga movie. (That’s a helluvan escalation across just three films, though! Has any other director ever shot so high so fast?)

I realise this review is a bit of a vague gush of praise, so one element that particularly intrigued me was the decision to shoot the film in a 2:1 aspect ratio. There’s some detail on the reasoning here (as well as general information on shooting choices, like the types of film and digital photography used), but essentially it was a compromise between Trevorrow and DP John Schwartzman favouring the blockbuster-standard 2.4:1 (so as to not look like a TV programme) and producer Spielberg wanting 1.85:1 (to favour the dinos’ height). I can’t speak to how it worked in cinemas, but 2:1 is actually a really pleasurable ratio for home viewing. Some 1.85:1 movies do just feel like big-budget TV episodes nowadays (which says as much about how far TV has come, in terms of its visual style, as it does anything else), 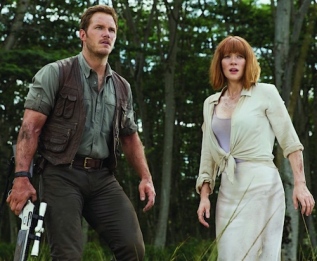 but 2.35:1 can feel a little too wasteful of screen real estate (as a believer in presenting films in their original ratio (as we all should be) you tend not to question it, but looked at objectively, 2.35:1 on a 16:9 telly is kinda silly. (Not that I’m advocating those daft-looking 21:9 TVs they made a couple of years ago, mind.)) I’ve no idea if 2:1 is likely to catch on more widely (I bet Vittorio Storaro hopes so), but I would quite like if it did.

I kind of felt like Jurassic World plugged directly into whichever part of the brain is responsible for pleasure and just downloaded itself there. I know it’s flawed; even as I was watching it, there were bits that made me go, “really?” Consequently, this review was originally pegged with a four-star rating — no doubt in part influenced by all the other not-completely-praise-filled opinions out there. But, thinking back on it, I just enjoyed it. I think I’ve outlined the main reasons why that was the case, and why I’m able to put aside the niggles. Maybe I’m going soft? (See also: my reviews of poorly-received 2015 blockbusters Tomorrowland and Terminator Genisys.) On the bright side, I watched Jurassic World and had a really good time — that’s what blockbusters are fundamentally for, isn’t it?

Jurassic World placed 12th on my list of The 20 Best Films I Saw For the First Time in 2015, which can be read in full here.

* Obviously The Force Awakens has already obliterated most of these records (but not all of them). Nonetheless, Jurassic World’s still-phenomenal success remains part of an extraordinary year for Universal, who have also had two other films (Furious 7 and Minions) surpass $1 billion in 2015. They even broke the previous record for full-year studio gross (Fox’s $5.53 billion) in August. They’re not normally so successful (their best result in the ‘studio league table’ for the past decade was third, but they’re usually fifth or sixth), and I rather like Universal — possibly just because of their awesome logo and fanfare, possibly because of their cool theme parks, or possibly even because of their rich history of great movies — so this story has made me unduly happy as it’s developed since the summer. ^