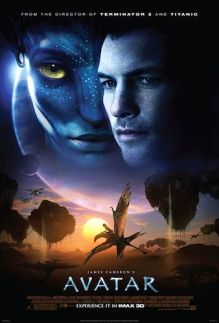 Avatar is The Film That Changed Cinema. The past tense can safely be used, despite the film only having been out a couple of days — it doesn’t matter if we like it, filmmakers and Hollywood executives have decided it’s the artistic and commercial way forward, and so it shall be. It barely even matters if people actually go to see it; not that it’s in much danger of flopping, coming in the wake of years of extreme hype and numerous sycophantic reviews.

What’s almost more irritating than that, however, is that it’s actually quite good. Flawed, unquestionably, and probably undeserving of the volume of advance praise heaped upon it, but far from a disaster.

It’s too long, for one thing. The end of Act Two feels like the end of the film… until it insists on going on for goodness-knows how long (my watch stopped working, I couldn’t check). It might not be so bad if it didn’t take its time getting to this point. Swathes of it feel like a dramatised nature documentary, only this time it’s about a fictional alien world. Talk of Cameron having created a fully-realised, living, breathing ecosystem are over-egged: there’s a half dozen creatures, at most, and their only relation is that they have these weird tentacle things in their hair that allow them to connect up to one another, like nature’s own biological USB. Maybe he knows who eats what and when and how and mating rituals and all that jazz, and if he does we should be thankful it’s not plastered all over the screen, but the creature creation/world realisation here isn’t anything beyond Jurassic Park.

The story itself isn’t bad. It certainly has an epic quality, which at least justifies the running time, though it’s a collation of elements from elsewhere. Of course, such things can be said of most stories these days, but with Avatar it seems even more obvious — a bit of Aliens here, a bit of The Matrix Revolutions there, a bit of An Inconvenient Truth for good measure, and so on with countless other recognisable tropes. The sin Cameron commits is that he mostly does it in quite a clichéd manner — it’s not just that you have seen it before, but it feels like you have too. Even the learning-to-fly bit, much praised in some quarters, reminded me of something else: slightly-rubbish TV miniseries Dinotopia, of all things. And don’t get started on the dialogue — “Try not to think of anything. That shouldn’t be too hard for you.” Dear God, how many times have we heard that line?

Towards the end Cameron does pull a few things out of the bag, mainly involving who gets killed and who doesn’t. Mostly, the story is a framework to allow the visual spectacle and an ecological/anti-war message. It’s as subtle as a nine-foot-tall blue alien. From crystal clear uses of familiar phrases like “shock and awe” and “hearts and minds”, to unconcealed references to our dying planet, Cameron attempts to criticise both American military tactics (invade, crush the locals…) and the destruction of the planet (…take all the natural resources for ourselves, no matter what the cost). It’s not that the message is wrong, it’s just that Al Gore did it with greater subtlety in a 90-minute lecture on that specific subject. From the outset, the military — specifically marines, of course — are quite clearly The Bad Guys Here, which is a refreshing change from the man who brought us Aliens. Quite what the American public are/will make of this outright criticism of both its military and energy consumption remains to be seen.

All this is realised through unrelenting CGI. It’s very good, but here Avatar falls victim to its own hype once again, because it’s still not 100% perfect. Perhaps it’s the closest yet seen — it certainly remains consistent throughout — but nothing had me wondering if they’d perhaps used prosthetics in addition to the CGI, as Davy Jones did at several points during Dead Man’s Chest, and I remain convinced that wonderful modelwork, as seen in the likes of Lord of the Rings, is still an unbeatable tool for creating convincing environments. Some will argue that we remain unconvinced of the alien creatures’ authenticity because we know they can’t be real, but some occasionally exhibit the plasticky shine of CGI or the jerky movement of motion capture. The Na’vi are certainly a step up from Robert Zemeckis’ dead-eyed humans in The Polar Express or Beowulf, but are they that much better than Gollum? Or even Jar Jar Binks? (In terms of the competency of the effects, I hasten to add.)

It’s hard to resist flaw-spotting with Avatar after reading so many praise-filled reviews. At the risk of sounding like one of those irritating people who sits at their keyboard declaring “ah-ha, I’ve realised something all you professional reviewers weren’t clever enough to see!”, I think this is in part due to the final act. Avatar has a stonking finale, from a huge Apocalypse Now-styled 9/11-echoing moment of destruction, to a thrilling and epic final battle (albeit interrupted by a mass of unwelcome pace-challenging plot). These sequences excel on almost every level, from visual wonder to the odd spot of emotion. And this is what your final impression of the film is, which can banish memories of the crawl through the middle, replete with those niggling flaws. I won’t be surprised if DVD/Blu-ray reviews commonly lose a star, robbed as it will be of the huge screen spectacle and reviewers forced to remember what they had to sit through to reach the big climax.

Oh yes, and Avatar’s meant to be convincing us that 3D is the future, isn’t it? And actually, 3D is quite nice. This is the first time I’ve seen a film in RealD, so I was pleased to discover how perfectly it works. No ghosting that I noticed and minimal discomfort even after such a long film, so from a viewing point of view I was happy with it. It adds depth to the image as well, rather than throwing things in your face — this too was pleasant. As I’ve noted on previous 3D reviews, this depth can bring a scene to life… not in the sense that you believe it’s genuinely happening behind that screen in front of you, but it does liven the images up.

What it doesn’t do is improve the storytelling — but then, what does? Some actors in a black box can convey a story wonderfully — look at Dogville, or any number of theatre productions — you don’t need sets, or costumes, or CGI, or even music or any number of other things we associate with the film experience. You could lump 3D in with these, or you could say it’s even less necessary — sets, costumes, and all evoke a time and place and create a realistic world in a way a black box doesn’t, but what does 3D bring to the table? It’s purely about spectacle, in the same way CGI or helicopter shots or using IMAX usually are. And that’s fine. But directors who’ve expressed an interest in shooting a ‘normal’ domestic drama in the format may be overestimating its import.

But for all the derivative plot, blunt message, cheesy dialogue, thrilling action, spectacular imagery, pretty good CGI and debatable 3D, Avatar may have a greater problem in gaining anything like widespread acceptance. It’s set 145 years in the future, on an alien world with floating mountains and other such fantastical elements, where a significant chunk of the story centres on a group of nine-foot-tall aliens (who fall in love and kiss, much to the loud derision of a group of 13-year-old boys in my screening) in a weird alien jungle with prehistoric-like alien creatures, and semi-scientific religious imagery and plot points that I haven’t even touched on… It’s pretty hard science-fiction, to put it simply. It’s not the accessible historical romance/disaster of Titanic, it’s not the real-world-styled action-based superheroics of The Dark Knight, it’s not an accessible adaptation of a widely-loved book like Lord of the Rings or Harry Potter… One could go on in this vein through all the highest-grossing movies of all time.

Instead, it’s the cover art from a pulp science-fiction/fantasy novel or short story magazine writ large with the budget required to pull it off, and it’s that for almost three hours. For every SF/F-loving sycophant there’ll be a member of the general public who thinks it’s a load of old tosh. The truth is somewhere in between, as ever, but I won’t be surprised if the style of Avatar’s business is closer to Watchmen than Titanic. (I don’t think this is too delusional, incidentally. It will perform more strongly than Watchmen, obviously, because it has that all-important PG-13 certificate in the US and a helluva lot more hype in the mass media. But I remain convinced it won’t manage to be a phenomenon to rival Titanic or The Dark Knight, or The Lord of the Rings, or Harry Potter or Pirates of the Caribbean or Star Wars.)

Avatar is a significant film. Thanks to the hype and importance attached to it, by both Cameron and the industry at large, this can never be taken away from it — even if we’ve heard its story before, seen 3D before, seen effects as good before. I don’t believe The Future Of Film is riding on it as much as some would claim — after all, so convinced are They of its status as a hit that an endless stream of 3D movies heavy on CGI have arrived ahead of it and will continue for years after. In itself, it’s quite entertaining and probably deserves to be seen on the big screen. But, as expected, it’s not the revolution that was promised.