I couldn’t do a list like that without publishing some statistics at the end, could I? No, no I could not. By my standards this will be a relatively brisk post, though, because I didn’t thoroughly log everything I could have. Nonetheless, I had some observations…

One thing I was particularly interested to compare was the age of my picks. I know my tastes skew recent — I like “old films”, but I do watch more new(er) stuff and (as demonstrated in my 10th anniversary statistics) I tend to place newer films higher in my year-end lists too. My first 100 Favourites list certainly bore that out as well, as you can see on this graph. Have the last ten years changed that at all? Well, no. Not in the slightest. If anything, it’s worse.

That’s 49% of my selections — almost literally half — from the 2010s, a decade which at the time of writing only includes seven years. And if you add in the 2000s as well, the last 17 years account for 72%, just under three-quarters of the list. I guess if I tried this again in another ten years some of the more recent films would fall out while the older classics would endure. I must say, I’m not alone in this — it’s something I’ve observed on other public-voted great lists, like the IMDb Top 250 (well-liked new films are always jumping in and then slowly dropping out), or Empire magazine’s 500 Greatest and 300 Greatest polls. The opposite seems to happen with critics’ lists, like Sight & Sound’s famed poll, which Citizen Kane topped for, what, 50 or 60 years, and the rest of the top ten is pretty stable too. But maybe that also changes a lot further down, I don’t know.

Talking of top tens, precisely 70% of the films on this list were previously featured in one of my year-end top tens. The worst affected were 2007, 2009, and 2012, each of which lost six films. Luckiest was 2016, with all ten top-tenners making the list. 2013, 2014, and 2015 only lost one each. That’s partly thanks to a change of perspective, of course (as you may have noticed, many of the films have shifted around in their ranking), but it’s also simply the case that some years had more films I liked than others. In terms of total numbers in this 100, the worst hit were 2009 and 2012, which only feature four films each. If you want to rank them thoroughly, 2009 definitely fared worse: only one of its films is in the top 50, while 2012 has three in the top 50, including two in the top 20, and one of those in the top 10.

Here’s a pair of graphs, comparing the years in flat numerical terms and as a percentage of their own year’s total. 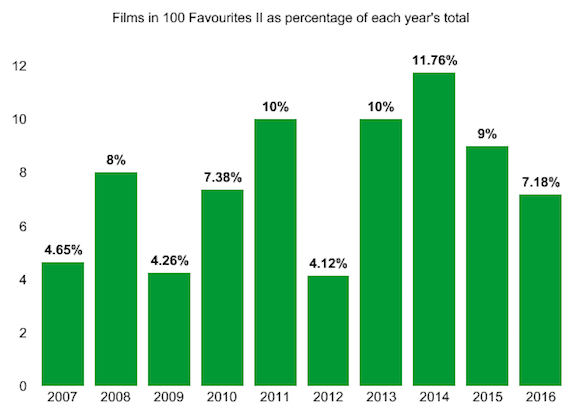 Compared to their previous positions in my year-end top tens, the biggest riser was The Story of Film: An Odyssey, shooting up 13 places from being 2015’s 21st to its 8th now. (I know #21 is not in the top ten, but I did a top 20 that year and noted The Story of Film was 21st, so…) The biggest faller within the chart was Stoker, also from my 2015 viewing, which dropped seven places from 7th to 14th. The worst-affected film not on the list was 2010’s #3, Inception, which isn’t among the nine 2010 films on the list. The #3 films from 2007 (Mean Creek) and 2012 (Master and Commander) also aren’t here, but (as we’ve seen) their respective years don’t feature as many films on the list so they’ve theoretically dropped less far.

Lastly, directors. There were 82 of them across the 100 films, of which 13 had two or more entries on the list. Top of the pile with four was, of all people, Matthew Vaughn. His films ranged from Kick-Ass in 8th up to Kingsman in 83rd, via X-Men: First Class at #16 and Stardust at #41. Sharing second place, each with three films, were David Fincher (Zodiac at #3, The Social Network at #11, Gone Girl at #66), George A. Romero (Night of the Living Dead at #62, Dawn of the Dead at #63, Land of the Dead at #89), and Steven Spielberg (The Adventures of Tintin at #9, War Horse at #86, Lincoln at #95). Finally, the remaining nine directors with two films apiece were Wes Anderson, Alfred Hitchcock, Akira Kurosawa, George Miller, Hayao Miyazaki, Chan-wook Park, Zack Snyder, Quentin Tarantino, and Denis Villeneuve.

Should you wish to revisit the excitement, all 200 of my 100 favourites can be found linked from their dedicated page here.