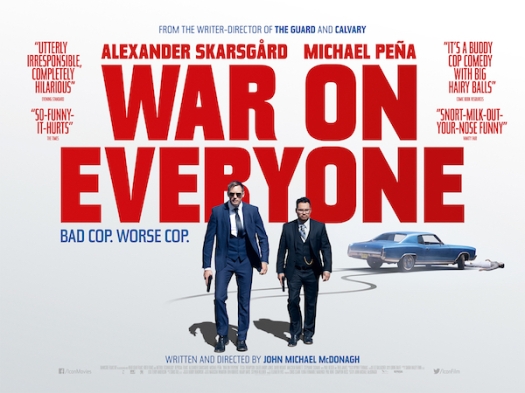 The third feature from John Michael “older brother of the guy who made In Bruges” McDonagh, War on Everyone is a comedy crime thriller about two dodgy New Mexico cops (Michael Peña and Alexander Skarsgård) who are tricked while trying to prevent a heist and so set about tracking down the stolen money — to pocket for themselves.

I’ve read that War on Everyone is massively offensive. Well, I mean, if you want to be precious about it, I guess some of it is. Maybe reading that left me expecting something incredibly outrageous, but sadly the film doesn’t hit those highs. I say “highs” — offensiveness for the sake of it is pointless, but some of the best material in the previous movies of the McDonagh brothers has come from a willingness to say and do un-PC things. War on Everyone doesn’t feel neutered in that regard, but nor is anything it does so striking.

Worse, it has a rambling narrative, wandering pace, and inconsistent tone. It’s not funny enough, frankly, but nor is the crime plot interesting enough to sustain the humour drought. Peña’s comedic gifts carry some of the flat material, though barely, while Skarsgård seems a little lost in an underwritten role. He and Tessa Thompson attempt to salvage something from a romantic subplot that springs from almost nowhere and then occupies a bunch of screen time to no one’s benefit. Caleb Landry Jones fares best as a foppish strip club owner, one of the henchman to Theo James’ big bad, whose entire character is basically, “he’s English — they make good villains, right?”

There are broad similarities to another irreverent comedy thriller from 2006 about a pair of not-so-nice fellas investigating a somewhat-complicated crime plot, but War on Everyone just serves to demonstrate how hard it is to do what Shane Black makes look effortless in The Nice Guys. I thought War on Everyone trailed well and looked like it would hit that same level, or at least something close to it, but sadly the final result feels fumbled.

John Michael McDonagh’s debut feature, The Guard, is on Channel 4 tonight at 12:05am. I’ve got the Blu-ray knocking around somewhere; really ought to get round to watching it…