The first live-action Rurouni Kenshin film was such a success that they followed it with a two-part sequel, filmed back-to-back and originally released six weeks apart over the same summer. This is the first half.

After the events of the first film, former assassin Kenshin (Takeru Satoh) is living a peaceful life with his newfound friends, until he’s summoned by the government to take on a mission. Turns out one of Kenshin’s former assassin colleagues, the vicious Shishio (Battle Royale and Death Note’s Tatsuya Fujiwara), is amassing an army to take down the government that left him for dead. Well, less left him for dead, more killed him after they won the war because he was too nasty to let stick around. Previous efforts to stop Shishio have failed, so now they want Kenshin to sort him out. Our peace-loving hero initially turns the job down, but events conspire to convince him he must act, and so he sets off alone to once again face the demons of his past.

Kyoto Inferno is one of those sequels that benefits from the its predecessor establishing the world of the story and the characters that inhabit it, meaning it can launch off on its own grander scale. Partly we see this in a material sense: it looks even more expensive than the first one, right from a fabulous fire-strewn opening location, and keeps up the visual impressiveness throughout. But it’s also in the scope of the story and the way it stretches the characters, both old and new. It really puts Kenshin through the ringer, testing and questioning his beliefs and principles, and his fighting skills too. As a film it finds power in that — whereas the first movie established his persona and gave it a bit of a work out, here he’s stretched to breaking point. 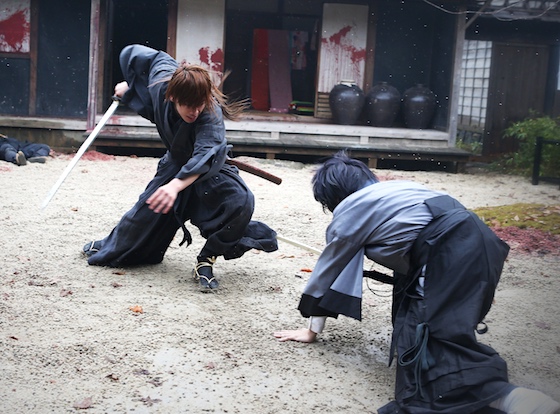 Despite being only the first half of a four-and-a-half-hour epic, when compared to the original film the story here feels more streamlined, focussed, and pointed. It’s not perfect in this respect — at one point Kenshin’s mate Sanosuke sets off to help him, only to disappear from the movie until he suddenly appears during the final battle — but such lapses are few and do little to impact the overall flow. As a villain, Shishio is more of a force and a challenge for our hero, not least because he has an army of henchmen, as well as a literal army, on his side. The fights are even more accomplished, spectacular, and epically staged than in the first movie, not least the huge climax that sees a pair of armies duke it out in the streets of the titular city.

Kyoto Inferno is unquestionably a first half — it ends on a handful of cliffhangers. That kind of thing sometimes irritates me, but it can work when done well, and I think this will turn out to be one of those good two-parters. It feels like a well-shaped movie in its own right, starting and paying off some of its own subplots rather than just leaving everything hanging. Some of these conclude in a way that is both an ending and indicates where the story will go next, which is a most deft bit of structure. The whole affair builds to a significant climax (the aforementioned battle) and a major turning point in the narrative, rather than just pausing events at the halfway point as lesser two-part movies do.

I enjoyed the first Rurouni Kenshin a lot, but this follow-up is even better. It expands the world of the story and deepens the characters, making for a more rounded and exciting movie. As mid-parts of trilogies (and/or first halves of two-parters) go, it’s more of a Dark Knight than a Matrix Reloaded; more of an Empire Strikes Back than a Dead Man’s Chest; more of a Two Towers than a Desolation of Smaug. Hopefully the next film can stick the landing…

Tomorrow: the legend ends in The Legend Ends.