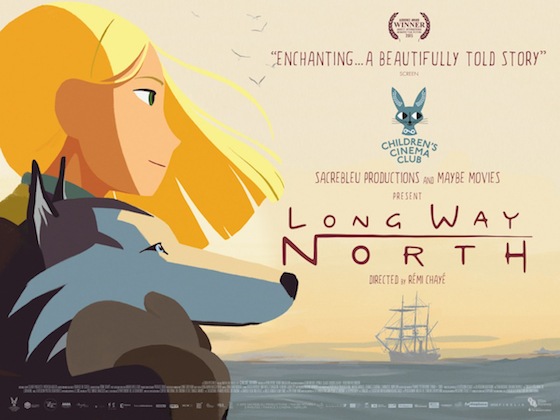 I can’t remember what brought this French-Danish animation to my attention, but I’m glad something did because it’s a beautiful little film that deserves to be better known. Set in the late 19th century, it’s about a young Russian girl, Sasha, who embarks on an adventure to the North Pole, following in the footsteps of her missing grandfather.

Regular readers may recall I ranked it among the top movies I saw last year, when I cited the “understated beauty in its deceptively simple visual style”. Indeed, the animation initially seems so plain that it feels like watching a draft animatic, but that conceals its ability to reveal subtleties when needed. In the end, the distinctive look is part of the film’s considerable charm.

I also mentioned its “equally subtle but strong feminist streak”, another positive aspect. Sasha is strong-willed and capable, but not without her faults, which makes her an engaging heroine. The film doesn’t overplay its “girls can too” side, which only makes it more successful, I think.

There’s none of the epic action sequences or broad humour that most English-language animation assumes kids need to keep them engaged, but instead Long Way North offers good characters on a proper old-fashioned exploration adventure. Highly recommended.

Long Way North placed 13th on my list of The 17 Best Films I Saw For the First Time in 2017, which can be read in full here.