No, okay, let’s not get into that again. Instead, how about this: the film’s Blu-ray making-of documentary. But oh, how that undersells it. More indicative, perhaps, is the fact it was screened as part of the South by Southwest festival last month. The Director and the Jedi isn’t some cobbled-together EPK featurette, where talking heads tell you how wonderful everyone is and how great the working environment was, while tech guys show you how to build a puppet or paint out greenscreen or, you know, whatever. No, for this one Last Jedi’s writer-director Rian Johnson and his producer Ram Bergman contacted documentary-maker Anthony Wonke to follow them around throughout the film’s production and provide a more truthful account of the film’s creation.

If that sounds like it would just turn out a video diary (another familiar special feature of the DVD era), the key would seem to be Wonke, who brings considerably more artistry than that. Most making-ofs are, for want of a better word, educational — “this is how they did it”. There’s some of that here, naturally, but it’s not about that. It’s more often about the psychology and emotion of being the people making a new Star Wars movie. But not heavy-handedly (Wonke isn’t constantly making people say how they feel or something), and that’s why it’s so artfully done. It’s even beautifully filmed and edited. It doesn’t look like crummy behind-the-scenes B-roll — there are some legitimately gorgeous shots in here.

If that makes it sound faked, no, it’s definitely not been staged. Far from it, in fact: this is a warts-and-all making-of. Exceedingly rarely for a documentary about a new release, Wonke has been allowed to include comments critical of the process or filmmakers. Chief among them: Mark Hamill’s much-discussed reservations about Johnson’s treatment of Luke Skywalker. As the title might imply, this is the doc’s strongest throughline, and would be its most affecting were it not for another part (more on that later). I say that because the feeling you eventually get from Hamill and Johnson is one of immense mutual respect, even as their beliefs about what should happen in the film clash. Except they don’t clash because Hamill, the dutiful actor, informs Johnson of his misgivings before committing to realise Johnson’s vision as best he can. It causes Johnson to doubt whether he’s doing the right thing — and, again, such elements of doubt are not something we normally witness in documentaries like this, even as they are surely always a part of the creative process.

Indeed, the creative process of filmmaking is another major point, especially in how it clashes with reality. The Last Jedi may’ve had a phenomenal budget and a massive production machine to back it up, but it also had just a 100-day shoot to squeeze in the construction of and filming on 120 sets, not to mention travelling around the world for location shooting. What Johnson and co want to achieve constantly clashes with what’s possible with the time and budget available. (The amount of effort that went into making the thala-siren milking scene happen just makes it all the funnier how much some people hated it.) As one producer puts it, eventually you have to fit everything in a box — “this box is big, but it has limits”. 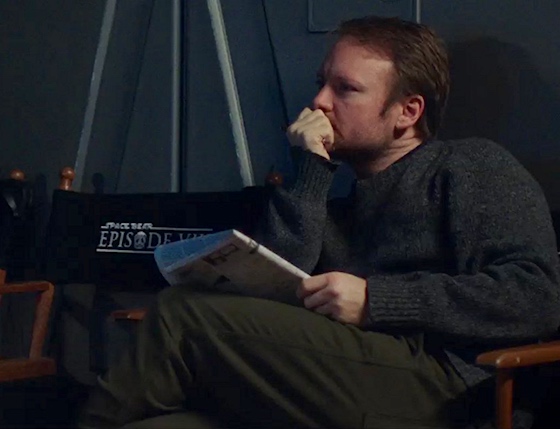 Consequently, there’s a lot of stuff with department heads butting against Johnson’s vision a little bit, either because of time, or money, or “that? In Star Wars?” feelings. But, like Hamill, they all get on with their jobs to serve his vision, because that’s filmmaking. And this is why we, as film fans/theorists, still discuss the notion of the director as auteur, even though filmmaking is undeniably a massively collaborative exercise. The Director and the Jedi is as good a demonstration as any of why the seemingly-conflicting notions of “filmmaking is entirely collaborative” and “auteur theory is relevant” are both true.

The other most memorable part of the film is how it handles Carrie Fisher’s presence and, well, eventual lack thereof. The bulk of the documentary is dedicated to the actual filming of The Last Jedi (Wonke wasn’t privy to either the writing or post-production, which is a shame because they’re certainly key parts of the creative process), but Fisher’s death is an unavoidable topic, and clearly they conducted at least a short interview with Johnson after it happened. Aside from those few comments, Wonke builds a tribute to her through her work and the regard others hold her in. He chooses to end the documentary, not with the last day of shooting, but with Fisher and Hamill finally reunited on set and on screen, the crew watching in hushed awe as they film that beautiful scene in the Crait hangar. It forms a fitting, respectful tribute.

“Beautiful” is a word I keep coming back to with this documentary — how it’s shot and constructed; how it handles its subjects; how the relationships between people come across. I guess those who hated Last Jedi and Johnson’s contribution will still rile against it to some degree, but even for them I think it’s worth a watch, if only to try to appreciate that no one was deliberately trying to “ruin their childhoods” or whatever. Quite the opposite. And even for non-fans, there’s insight here into humanity when it’s applied to a joint creative endeavour. If that sounds a bit grand for a blockbuster’s making-of, well, The Director and the Jedi is much more than your bog-standard making-of.

The Director and the Jedi is included on the Blu-ray of Star Wars: The Last Jedi, which is released in the UK today.