Sky Cinema’s latest acquisition in their attempt to establish a “Netflix original”-style brand is, ironically, also a Netflix ‘original’… just not in the UK (in the US, it was released on Netflix last week). It’s also probably their most promising grab yet… although when its forerunners are Monster Family and The Hurricane Heist, that’s not saying much. But this is a new sci-fi/thriller from the writer-director of Gattaca, so that’s gotta be worth a look… even if he has spent most of the intervening two decades making some, shall we say, less-well-regarded movies.

It’s set in a near future where everyone has ocular implants that feed a constant stream of data, like non-stop augmented reality, identifying people and places, putting digital adverts on the side of buildings, and so on. These devices are connected up to a central network that allows what everyone sees to be monitored and played back when needed — for example, if a crime is committed. It’s the ultimate eyewitness, literally. When someone’s murdered, the police can just play back the last few moments of the victim’s life to see the killer. But when bodies start turning up whose final moments have been tampered with, detective Sal Frieland (Clive Owen) finds himself on the trail of an off-the-grid hacker (Amanda Seyfried) with the ability to alter records — and when the entire system is based on the notion that what’s recorded is unequivocal truth, her skills are a massive potential threat. 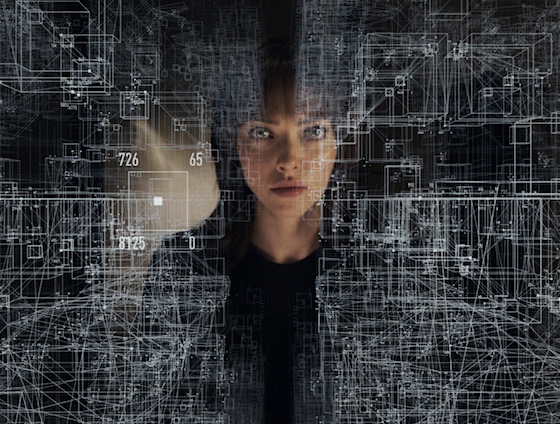 Many a lazy review has described Anon as “like a Black Mirror episode”, which is not wholly inaccurate but is getting to be a stale descriptor — Charlie Brooker didn’t invent high-concept dystopian sci-fi about the dangers of future technology, so why wheel out the comparison every time anyone else dares venture into the same ballpark nowadays? Nonetheless, that is the ballpark Anon is playing in, but mixing speculative sci-fi with an equal dose of hardboiled noir to keep things spicy.

That’s not my only problem with other reviews, though, many of which have put forth low scores and negative reactions. I saw some of them in advance of my viewing, so while watching I kept thinking, “it must go badly wrong later, because so far it’s great.” Well, that moment never came. I wouldn’t say the film is perfect — some parts, especially later on, are a tad hurried, meaning more clarity of motive would be nice — but, for me, the whole worked. There are some interesting sci-fi ideas (all the stuff about being able to trust what you see, including a standout extended sequence where the hacker messes with Sal’s head), plus it feeds some ever-relevant commentary on privacy and surveillance, with the added texture of a noir-shaped plot and atmosphere for good measure.

In fairness, there’s clichéd stuff too, though I’m not sure how much it should bother us. For one example, it’s not much of a spoiler to say that Sal has a “dead kid” backstory, something which is a bit overdone at this point, but your mileage will vary on how much that stuff bothers you — while some of us just think it’s a tired trope, for others it seems to completely ruin the film. Conversely, I read someone criticise it for using “noir clichés” and just thought “that’s called genre, kid”. I also saw a review which decided the film was worth 1-out-of-10 just because there was a scene where they were smoking indoors, so there’s no accounting for what different people will consider important in their assessment of artistic quality.

In my opinion, Niccol and co have offered up a well-realised near-future world — not necessarily fully imagined (it’s never explained how we got to a point where everyone has these implants, seemingly enforced by law, but that doesn’t really matter), but the way the tech is depicted and how it affects everyday life is very believable. We’re thrown into the deep-end of this environment, with just enough exposition to keep up, before the film quickly moves onto the intriguing mystery that challenges the rules of this world — and considering we’ve only just learnt the rules, being able to get straight to how they’re being circumvented is impressively economical storytelling. It’s also a neat setup for having to go back to old-fashioned cloak-and-dagger-type detective work in a modern setting — this future is so high-tech, the only way to stop the criminal from detecting the operation against her is to put Sal undercover using no-tech communication.

It’s a really well made film, too. The locations are suitably evocative — the police buildings are defined by huge brutalist concrete slabs — which have been attentively framed and shot, without show-off-y camerawork. Then there’s the on-screen graphics during the point-of-view shots, which are detailed and thorough in their content, design, and execution. Their plausibility lends an automatic verisimilitude to the whole situation. And the POV shots had another nice surprise in store… 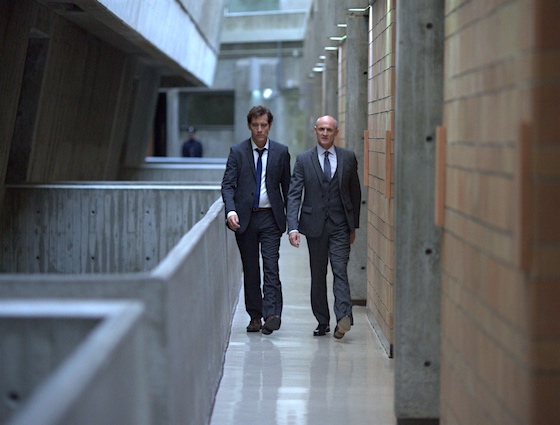 Regular readers may recall that I’m a fan of a good variable aspect ratio, so it was a pleasant surprise to find that Anon features that technique — it’s unusual to see it outside of huge-budget films that have been shot/formatted for IMAX, and even then there’s no guarantee the multi-ratio version will be widely available (cf. Marvel only including them on 3D Blu-rays; Brad Bird not allowing Ghost Protocol to be released with it at all). In Anon, the ‘drama’ scenes are presented in your movie-standard 2.35:1, but it expands to a screen-filling 16:9 every time we see through someone’s eyes. These changes are very effective. The film employs the technique early and then often, so it doesn’t have the “wow” factor that some IMAX films achieve even when viewed at home, but it’s suitably immersive. Indeed, this would probably play really well on a vision-filling IMAX screen. The fact I wouldn’t have a chance to see it even if it did get IMAX showings means I’m not too sad it’s a direct-to-streaming release.

That said, it’s kind of a shame Sky snapped it up over here. This is anecdotal evidence I know, but I know far more people with Netflix (like, pretty much everyone nowadays) than with Sky Cinema (I’m not sure I know anyone but me, actually, and I only subscribe occasionally), and I’d like to be able to recommend this to people, especially so as to go against the grain of the criticisms that I feel have been unwarrantedly negative. Well, obviously I can still recommend it, but how useful is that if people aren’t going to get the chance to see it on the basis of that recommendation?

Nonetheless, recommend it I shall. Perhaps Anon can’t equal other works at the top-tier of its genre, but I feel some have been unfair in writing it off. Any familiarities in the shape of its plot are in aid of creating that noir atmosphere, while the sci-fi concepts are reasonably considered and executed. For fans of the genres involved, it’s definitely worth a look.

Anon is available on Sky Cinema from today.