“This is madness,” exclaims Batman at one point relatively early on in this anime interpretation of the DC superhero. He could be speaking on behalf of us viewers… although, at that point, he — and we — don’t even know the half of it…

The story begins when a scientific experiment gone wrong hurtles Batman, most of the Bat-family, and Arkham Asylum’s inmates back in time to feudal Japan. Due to a quirk of the machine, the Dark Knight himself arrives years after everyone else, which has given the villains a chance to take control, each establishing their own fiefdom. Batman and his allies must find a way to send everyone back to the present day, before history is irreparably altered.

That’s just the start of the bonkers stuff that goes down in this film — never has the term “bat-shit crazy” been more appropriate. I mean, as if the basic setup wasn’t inherently barmy enough, by the time it gets to (spoilers!) a climax where the villains’ mansions morph into giant robots that then combine into a Joker-headed super-giant robot that fights against a giant monkey-samurai made up of hundreds of flute-controlled little monkeys, you’ll be wondering just how strong the filmmakers’ drugs were. And that’s not even the end of it. I don’t think there’s any rational way to assess the quality of the plot here — either you go with it and revel in the madness, or you just give up because it’s too much. 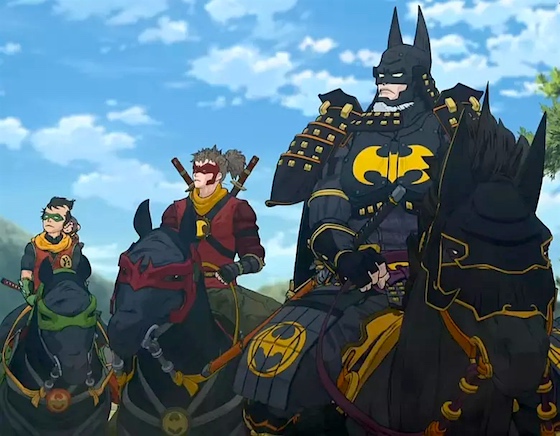 The sense of possibly-drug-induced unreality is only heightened by the chosen animation style. The film’s clearly been produced with 3D computer animation, but rendered in a style designed to emulate 2D cel animation. It has the frenetic hyper-real movement made possible by the former, while otherwise trying as hard as possible to look like the latter, which makes for a weird disconnect. When you marry that up to the over-detailed, sometimes grotesque character and location designs, plus an overabundance of eye-popping colour, it becomes a surreal sensory overload. Oh, and at one point it changes style completely, just because it does, into some kind of sketchy watercolour thing, but only for a little while.

Batman Ninja is a strange movie all around. I wouldn’t say I enjoyed it, but it was certainly an experience. Would our collective culture be better off if such madness was reined in, or is the world a better place for having this kind of battiness? You may have to judge for yourself, though I think only the bold or the foolish need apply.