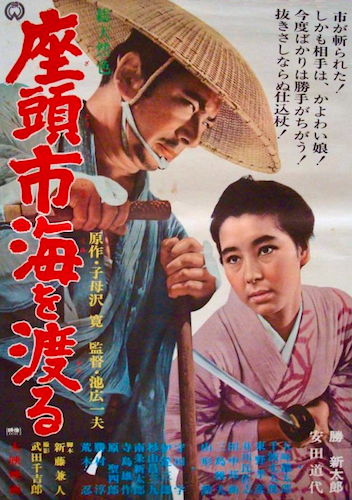 Zatoichi’s Pilgrimage is the ‘lost’ Zatoichi movie: at some point the Weinsteins bought the rights to it because Quentin Tarantino was considering a remake, with the side effect of making it unavailable legally for years — while all the other Zatoichi films appeared on DVD in the US, Pilgrimage remained AWOL.* Its legal release finally came in 2013 as part of Criterion’s Blu-ray box set (which, coincidentally enough, is out in the UK this week). Clearly it was felt to be worth the wait, because it’s a highly-regarded instalment in the series. That might cause a newcomer to wonder if said wait led to some bias — that “hurrah, a new one!” feeling. Well, if it did it was entirely justified, because Pilgrimage is superb.

I’ve often written in my Zatoichi reviews about the inaccuracies of the English-language title “translations”. Pilgrimage is another one… but, for once, the English title seems more apt. The original translates along the lines of Zatoichi’s Ocean Voyage, and while the film does begin with Ichi going on a voyage across the ocean, that’s the extent of its relevance — after that, he’s on his pilgrimage. Well, until he kills a guy and is followed by the chap’s horse, who then leads Ichi to the man’s home. Maybe Zatoichi and the Horse would be the most accurate title… but he’s sort of on a metaphorical pilgrimage even after he abandons his official one, so that’s okay. What develops could pithily be described as Seven Samurai meets High Noon: a group of humble farmers need protection from a violent gang, but, despite Ichi’s efforts to recruit them to defend themselves, they cowardly leave him as their sole protector.

We’re up to the 14th film in the series now, and in a bid for something different star Shintaro Katsu and director Kazuo Ikehiro tapped Kaneto Shindo (director of Masters of Cinema/Criterion-friendly films Onibaba and Kuroneko) to write a screenplay focused on Ichi doing penance for all his killing, hence the titular pilgrimage. But by this point the Zatoichi series was a reliable money-spinner for studio Daiei, so the head of the studio ensured they didn’t let things stray too far from the formula. They got away with enough, I think. Ichi’s early attempts at atonement set the tone for the piece, and the final many-on-Ichi fight is more of a struggle for our hero than usual.

Indeed, the way Ikehiro and Shindo build up to the finale — Ichi’s late-night heart-to-heart with latest love interest Okichi, then slowly walking out alone as the villagers hide away in their houses — actually creates a bit of tension and suspense before the battle, something rarely felt as we know Ichi’s always going to win. In the fight itself, Ichi actually seems overwhelmed by the onslaught of so many opponents. It’s a (slightly) more realistic take on the character: we’ve seen him take on this many with ease before now, but it wouldn’t really be easy; here we feel his struggle to come out on top, which makes the action more tense and exciting. The series’ other big final fights have marked themselves out with gimmicks or trickery (fire, drums, bird’s-eye camerawork, etc), but with this one it’s just how hard-won it is, how tough it is. Plus, as noted, it also recalls High Noon quite effectively: Ichi stands alone in the middle of the empty village, ready to face the attackers, while Okichi runs from house to house, begging the villagers to help, and we see them cowering inside. 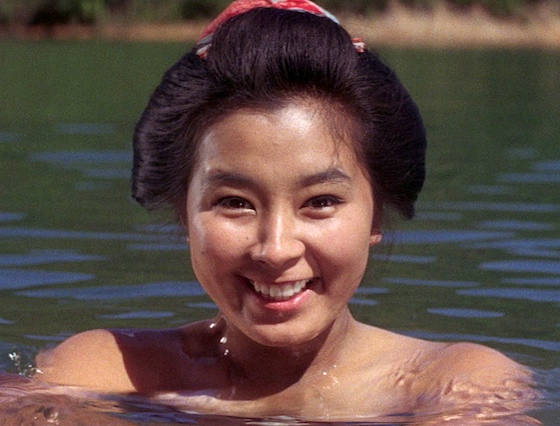 Ah, Okichi. Ichi has had many female admirers before (one per film, more or less), but most of the time their interest in him isn’t reciprocated; or, if it is in Ichi’s heart, he never lets his head get in the way and always leaves. Here, though, this feels genuinely like a romance. A lot of credit for this surely belongs to actress Michiyo Yasuda — as Walter Biggins lays out at Quiet Bubble, she “gives simmering intensity and density to a role that seems implausible on the page. It’s not that Katsu is unattractive, and he definitely has a bumbling charm, but this woman falls in love with the dude who killed her brother and who she savagely slashed with a knife during their first meeting. Yasuda makes Okichi’s turnabout seem natural and realistic […] rather than crazed.”

There’s quality throughout Pilgrimage’s supporting cast. Isao Yamagata makes for a top-drawer villain as ‘smelly’ Tohachi, the local boss and horse trader (hence why he smells of horse manure). He gets a lot of good screen time alongside Ichi himself, trading veiled threats as much as physical assaults. His confidence makes for a nice change from the recent bad guys, who generally cower from Ichi’s reputation. Also, his weapon of choice is a bow and arrow, an unusual armament for this sword-focused series, but it leads to a couple of fun demonstrations of Ichi’s skill. Equally great is Masao Mishima as village headman Gonbei, jovially smiling and laughing while he’s threatened, or while discussing the conquering of their village, or while scheming and plotting to let Ichi fight on their behalf but without their backing. The villagers’ hiding is partly cowardice, but also a cunning scheme that, basically, gives them plausible deniability. Sneaky so-and-so. 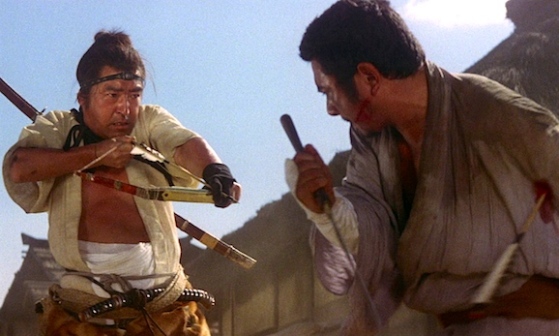 The skilfulness extends behind the camera, too. I’ve already discussed screenwriter Shindo, but fans of the Zatoichi series will have good reason to recognise the name of director Kazuo Ikehiro: he previously helmed Chest of Gold and Flashing Sword, two of the best-directed Zatoichi films, and Pilgrimage can comfortably join their ranks. The whole film is nicely directed, with beautiful shot choices and framing, but particular standout sequences include an underwater sword fight (it’s only brief, but it’s effective), and a fantastic opening scene where Ichi punishes a brazen purse snatcher (credit to Shindo, again, for setting up some of the film’s themes and mirroring its finale as Ichi steps up from a crowd of do-nothings to bring justice). Some bad news, though: this is Ikehiro’s final contribution to the series, sadly.

At least he goes out on a high. As Bill Hunt and Todd Doogan of The Digital Bits put it, Zatoichi’s Pilgrimage is “one of the crown jewels of the series.” It’s little wonder Tarantino was considering a remake.

Zatoichi’s Pilgrimage placed 13th on my list of The 26 Best Films I Saw For the First Time in 2018.

Criterion’s Blu-ray box set of the Zatoichi films is available in the UK as of this week.

* If you purchased a UK DVD titled Zatoichi’s Pilgrimage back in the ’00s, it wasn’t this film. For reasons unknown, a company called Artsmagic released the 23rd film, Zatoichi at Large, under the wrong title. There’s more information about that here. ^