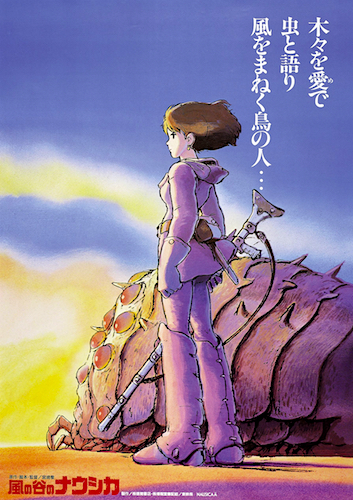 I watched Princess Mononoke before Nausicaä, and also checked out the Blu-ray’s special features. Those include the film’s original Japanese trailers, which emphasise that it’s “13 years after Nausicaä”, which intrigued me, because director Hayao Miyazaki had made plenty of other films in between. But, having watched the earlier movie, the connection and similarities become clear: Nausicaä features an ecological message, a threat from nature that isn’t, industrial humans (with a female general) being the actual villains, innocent townsfolk that need saving, a princess who’s the only one who understands, and a boy from a different kingdom who helps her. They’re not identical, of course, but there’s a lot of overlap…

The animation is nice without being quite as mindblowingly good as later Ghibli productions — they certainly hit the ground running, but they would improve too. The full-length English dub was created in 2005 (the original US release was drastically cut and rewritten) and boasts a helluva cast: Uma Thurman, Patrick Stewart, Mark Hamill, Edward James Olmos, plus Alison Lohman as the lead and a young Shia LaBeouf. I don’t mean to disparage those actors who primarily ply their trade dubbing anime, but these starry Disney-funded dubs do add a certain extra oomph to the vocals.

Nausicaä was only Miyazaki’s second feature, but already shows a lot of the themes and concerns that would go on to characterise his later movies. I feel like maturity and/or experience make some of those later films better, but this is still a powerful demonstration of his talents.

Nausicaä of the Valley of the Wind was viewed as part of my Blindspot 2018 project, which you can read more about here.