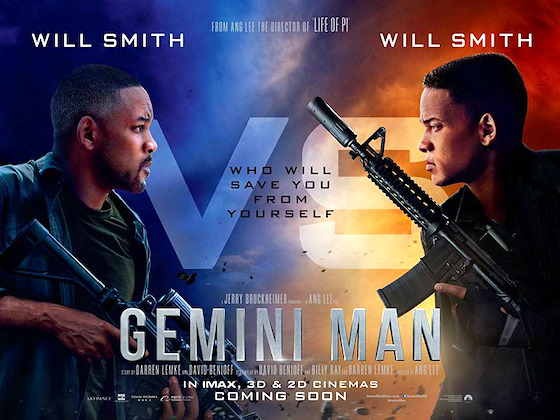 Gemini Man is a film that, at every point I can remember it being talked about, was discussed more for its various technical feats than anything else. Partly that’s because there are a couple of angles. Firstly, the most obvious: it stars Will Smith as an ageing assassin who must fight… a 25-years-younger Will Smith, achieved with motion capture and CGI. Secondly, director Ang Lee shot it in 3D 4K HFR — that’s High Frame Rate, if you don’t know, with the picture running at 120 frames per second rather than the 24fps we’ve been used to for the past 90-odd years (excepting The Hobbit trilogy, though only if you saw one of the relatively-limited HFR theatrical screenings). Maybe it shouldn’t be a surprise, then, that Gemini Man often feels more like a tech demo with a plot grafted onto it than it does a fully functioning movie in its own right.

Consequently, I’m going to spend more of this review writing about the film’s presentation than its content. To some degree, that speaks for itself as criticism. But if you are interested in the film and don’t give a toss about how exactly you’re seeing it (or don’t have a choice), feel free to whizz down to the last two paragraphs (just after the picture of Young Will Smith) where I finally offer some thoughts on the film itself.

Back to the tech, then. There’s currently only one way to see Gemini Man in its intended format: at the cinema. I say “currently” — obviously such opportunities expired when its theatrical run ended, and I don’t imagine it’s likely to get a re-release. Every other option is a compromise. Want to see it in 3D? Not only will you need the appropriate home cinema setup, but you’ll have to import the disc from Germany, the only country where it was granted a 3D Blu-ray release. Want to see it in HFR? That’s easier, because the 4K disc is widely available, though obviously you still need the appropriate kit. (I presume the digital 4K versions are HFR too, but I don’t actually know that.) Mind you, even that’s something of a compromise, because tech limitations mean the home release is 60fps rather than the full 120 (to be fair, so were most HFR cinema screenings).

I watched it in 4K 60fps, and, oh, it’s weird. So so weird. Distracts-you-for-the-entire-film weird. Virtually-the-only-thing-I’m-going-to-talk-about-in-this-review weird. The disc even begins with a notice/warning that it’s at 60fps rather than 24fps, so presumably they know how weird it feels. The most obvious effect of more frames per second is that motion is smoother, with reduced motion blur, but that applies on a micro level to lend an unnatural clarity to everything. The effect on motion is often called “the soap opera effect”, because such cheap drama has traditionally been shot at TV’s higher default frame rate. Of course, so is much other television, or even behind-the-scenes footage on films; so while it’s not a wholly inaccurate nickname, the effect reminded me more of TV documentaries. The film begins with a train journey in a lusciously green-looking Belgium, before travelling around the globe to other sunny locations with glamorous establishing shots. It looks less like a Hollywood action movie, more like Will Smith is the new host of Cruising with Jane McDonald.

When it’s not playing travelogue, it looks like a tech demo. I don’t think that’s just the added smoothness, but everything about how it’s shot: it’s very bright and saturated, the kind of look you get in marketing promos, not feature films. Even paused it looks a little odd. Partly that’s the boost given to the colour palette by HDR, but at this point I’ve watched plenty of other films with HDR to be familiar with its effects, and I think this was beyond normal. The other thing the visual quality reminded me of was low-budget films by very new/amateur filmmakers, and that’s definitely to do with Ang Lee’s shot choices — lots of stuff at eye level, gentle pans and tilts, in locations so dull they might have been found around someone’s hometown. It doesn’t help any that all the fonts they’ve used for captions look like the editing software’s bland default. And further, it’s also the effect of shooting on high-resolution digital video — it’s ultra-clear, with none of the grain of real film, but, again, that’s a look more familiar from low-budget productions. Would HFR work better if it was shot on real film? You’d get back some of that tactile grit, rather than telltale digital smoothness.

What about when the film gets to its big action sequences — the kind of thing that obviously a no-budget newbie couldn’t afford. Would the change of milieu fix the mental associations? Yes and no, in that it just adds other ones: the first big sequence, the bike chase you probably saw in trailers or clips, looks like a computer game. Again, it’s a mix of elements: the digital sheen, the smooth frame rate, the shot choices (lots of POV or close following, like a game’s third-person camera), and an unnatural-seeming speed — it looks like some of the CGI has been animated too fast, though that could be HFR’s fluidity making normal motion look odd because we’re not used to it.

The advantage of wondering all this while watching the film at home was that, afterwards, I could pop in the regular Blu-ray and compare a few scenes in 24fps 1080p SDR. Immediately, it looks a lot more like a regular movie. Is that indeed the loss of HFR’s smoothness, or is it the drop in resolution, or the loss of HDR enhancement? Without being able to view different permutations it’s hard to say which one causes the jarring effect, or if it‘s the incremental change made by each that adds up to a radically different picture when combined. That said, obviously I’ve watched 4K HDR films before, and it’s never struck me as odd-looking as much as this film (I’ve seen some strange applications of HDR, but that tends to be in individual shots/scenes, not an entire movie). The bike chase also looks more normal on the whole, though some of the bits I alluded to before still looked dodgy, so I can only conclude it’s a mix of the animation (because I’m sure it’s not a real stunt) and the HFR.

If all that wasn’t distracting enough, there’s the fact that one of the film’s main stars is a de-aged Will Smith. We’ve seen plenty of de-ageing in films now, whether it be Marvel’s flashbacks or Scorsese’s varied eras in The Irishman. This feels more extensive, though — they’ve not just airbrushed Smith’s age-related blemishes, but recreated his youthful visage with full motion-captured CGI. The end result is both incredibly realistic animation and also not quite there. Maybe that’s just because I know it’s not real — I wonder if someone unfamiliar with the film’s setup wouldn’t register it. It looks more convincing than I remember Peter Cushing being in Rogue One, and I remember stories of kids who didn’t realise he was CGI. I guess the best praise is that, as the film went on, I realised I’d just accepted Young Will as his own character, not a second Old Will in disguise. There are scenes where he’s called on to do Proper Acting and it works. Unfortunately, it’s almost ruined by one scene at the end where the effect suddenly looks like a ten-year-old computer game. Was this a last-minute re-edit, I wonder, leaving them without enough time to do the CGI properly? It’s a shame to have dropped the ball at the last hurdle. 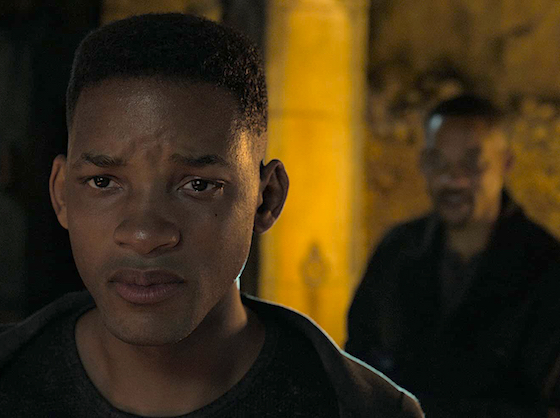 And if you can get past all the technical distractions (which I guess most people will, as “the tech” is not why most people watch films, and on any format less than 4K the visual oddness evaporates anyway), what about the film itself? Well, it’s a passable action-thriller with a sci-fi tweak. For the level of the latter, think something like Face/Off rather than, say, Blade Runner. I’ve seen quite a few people compare it to a ’90s action movie and that’s pretty fair — subtract the fancy cameras and CGI and that’s what’s left. It’s not necessarily a bad thing, unless you’re so young that ’90s action movies are Old and consequently Bad. There are a couple of very impressive and exciting action sequences — the bike chase, primarily (which I bet looks fab in 3D). That said, the Blu-ray’s visual effects featurette reveals they faked a bunch of stunts that Tom Cruise and Chris McQuarrie would’ve done for real as a third-tier action sequence, which takes the shine off a little. (On the other hand, it also reveals that there’s some fucking incredible CGI in this movie — stuff you’d never imagine was an effect but is, including a full-on close-up of Old Will.)

So, the reason the tech presentation remains the film’s strongest talking point is that the film underneath is decent but nothing particularly special. That said, I do think it’s been given a hard rap by critics and viewers alike — whether or not you’re interested in the experimental visuals, it’s a fine sci-fi-tinged action blockbuster, with all the attendant qualities and demerits that implies.

Gemini Man is available on Sky Cinema and Now TV from today.