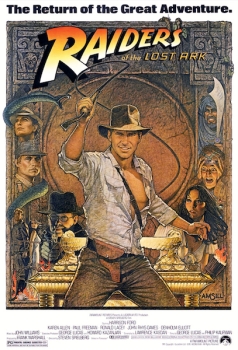 The Return of the Great Adventure.

Also Known As: Indiana Jones and the Raiders of the Lost Ark

Director
Steven Spielberg (E.T. the Extra-Terrestrial, The Adventures of Tintin: The Secret of the Unicorn)

Screenwriter
Lawrence Kasdan (The Empire Strikes Back, The Bodyguard)

The Story
1936: adventurer Indiana Jones is hired by the US Army to retrieve the mythical Ark of the Covenant, which they believe is on the verge of being uncovered in Egypt, before the Nazis can get their grubby mitts on it.

Our Hero
Professor of archeology, expert on the occult, and obtainer of rare antiquities, Indiana Jones. Good with a whip; not good with snakes.

Our Villains
Dr. René Belloq, essentially the evil Indy: a fellow archeologist with fewer scruples, who often takes credit for Indy’s hard work and is now in bed with the Nazis. They’re most memorably represented by creepy Gestapo agent Toht, played by Ronald Lacey, who was cast because he reminded Spielberg of Peter Lorre.

Best Supporting Character
The daughter of Indy’s mentor, and his one-time love, Marion Ravenwood, who’s roped in because she happens to possess an artefact with a clue to the Ark’s location. Feisty and capable of holding her own (some of the time, anyway), it’s a shame she didn’t appear in the initial sequels — at Lucas’ insistence, apparently (he also kept her out of the spin-off novels). She eventually returns in Kingdom of the Crystal Skull, the only character from the first three films to be brought back for that adventure (besides Indy, obv.)

Memorable Quote
Sallah: “Indy, why does the floor move?”
Indiana: “Give me your torch… Snakes. Why’d it have to be snakes?”

Memorable Scene
Goodness, where do we start? Well, how about the start! Having made his way safely through a boobytrapped cave, Indy switches a bag of sand for the idol he’s come to retrieve. Unfortunately the trap is not fooled, and Indy has to run out as the place collapses around him and all the traps are triggered — including, most famously, a giant rolling boulder.

Write the Theme Tune…
It’s only one of the greatest movie main themes of all time. Composed by John Williams (of course) it’s technically called The Raiders March, and is a combination of two ideas Williams wrote for Jones’ theme that Spielberg suggested be put together to make one piece.

Technical Wizardry
The film is naturally packed with stunts, one of the most memorable being when Indy is dragged under and out behind a moving truck. To achieve it safely, more clearance was created under the truck by constructing one that was higher than normal and digging out the centre of the road. The shot was filmed at 20fps, lower than the standard 24, so that when played back the truck appeared to be moving faster. The feat was performed by stuntman Terry Leonard, but Harrison Ford was actually dragged behind the truck for some shots. When asked if he was worried, Ford replied, “No. If it really was dangerous, they would have filmed more of the movie first.”

Truly Special Effect
The climax, when the Ark is opened, was a field day for ILM. Techniques used include “animation, a woman to portray a beautiful spirit’s face, rod puppet spirits moved through water to convey a sense of floating, a matte painting of the island, and cloud tank effects to portray clouds.” Plus the villains’ heads melt (a gelatine and plaster model exposed to a heat lamp), collapse (a hollow model with the air sucked out), and explode (which nearly landed the film with an R rating).

Making of
Have you heard the one about the scheduled sword fight and everyone being ill? You have? Oh, okay then.

Next time…
The film was a massive success, so has spawned tonnes of media. Primarily, three direct sequel films, with a fifth set for 2019. Then there’s the three-season TV series The Young Indiana Jones Chronicles, 13 adult novels, 33 Young Indiana Jones novels, 11 “choose your own adventure”-style books, eight German novels (which have never been translated into English), numerous comic books, and 19 computer games, including nine with original storylines and two Lego Indiana Jones games. Also, a stunt show at Walt Disney World in Florida based on Raiders that has been running for 27 years. Whew!

What the Critics Said
“Yes, it’s as entertaining as you have heard. Maybe more so. Raiders of the Lost Ark is, in fact, about as entertaining as a commercial movie can be. What is it? An adventure film that plays like an old-time 12-part serial that you see all at once, instead of Saturday-to-Saturday. It’s a modern Thief of Baghdad. It’s the kind of movie that first got you excited about movies when you were a kid. (Translation for today’s children: It’s better than anything on TV.)” — Gene Siskel, Chicago Tribune

What the Public Say
“Spielberg and George Lucas had, in the same year, rewritten the rules of the science fiction genre; Lucas with Star Wars and Spielberg with Close Encounters of the Third Kind, but what could they do together? Greatness, it turns out. Their contribution: Raiders of the Lost Ark, one of the best, most exciting, most brilliantly written action movies of all time. It’s fun, it has a great sense of wonder and adventure. It’s scary, it’s bloody, it’s violent but you never come away feeling unclean. It has a hero, Indiana Jones, who is fallible but not a wimp. […] I can talk all day about Raiders of the Lost Ark, but I must simply conclude that the movie is just plain fun” — Jerry, armchaircinema

George Lucas and Steven Spielberg teamed up for the first time here, recycled elements from movies beloved in their youth, and produced something new and exciting that is still a reference point for blockbusters 35 years later. (We’re getting homages to homages now, aren’t we? Weird.) It’s pretty much a perfect adventure movie: relentlessly paced, packed with action, lightened with humour, full of likeable heroes, who are brave and competent but also a little bit flawed, and hissable villains, with scene after scene of imaginative situations and fabulously staged derring-do. It’s perfectly distilled pulp adventure, and pure cinematic entertainment.