Once-fêted writer-director M. Night Shyamalan surprised a lot of people in 2015 by finally beginning his long-awaited comeback (a day I think it’s safe to say many thought would never come) with low-budget high-concept horror The Visit. Then earlier this year he surprised people again by delivering another long-promised return. Well, he surprised people who didn’t find it out on the internet the day after the darn thing came out, anyway. For that reason (plus the newsworthy announcements that have followed in its wake), this review presumes you know Split’s last-minute twist.

And, like many a twist before it, once you know what’s coming it can’t help but colour the entire film. What’s unique about Split’s reveal is that, really, it shouldn’t — it’s a bonus extra-textual connection, not a traditional twist that forces you to reassess the narrative you’ve just seen. The problem, I suppose, is that it’s a distraction; or it was for me. I spent the entire movie with a background awareness that this was in the same universe as Unbreakable, which meant that (a) I was hyper-attentive for anything that suggested a link before the closing cameo (I didn’t see anything significant; I think the similar posters are probably the cheekiest thing), and (b) any tension about whether or not James McAvoy’s character will turn out to have (semi-)supernatural powers dissipates, because of course he will — that’s the world we’re in.

This is why having twists spoiled is bad. I guess journalists felt that as it wasn’t a twist inherent to the film’s narrative — not like, say, The Sixth Sense or Fight Club — it was OK to shout about it online with uncommon speed. In fairness, the later news that the trilogy-completing Glass is in development means that, even if they had kept schtum, anyone waiting on Split’s digital/DVD/streaming/etc release was likely to have the connection blown anyway. But I didn’t want to be having a conversation about the point at which discussing spoilers is permissible. That’s a distraction from the film itself, which does it a disservice. But then, so’s knowing the ending before you start.

I guess this is a long-winded way of saying I don’t think I’ve fairly judged Split yet. I was too busy thinking “OMG, Unbreakable sequel, yay!” Still, it’s easy to spot several plus points. The Witch’s Anya Taylor-Joy makes for an engaging heroine, her character quiet but assured, more capable than the bolshy but kinda useless classmates she’s imprisoned with. Even as a twist-spoiled viewer is waiting for the inevitable reveal that, yep, McAvoy has powers that are going to manifest, there’s tension in when and how and who’ll make it out alive. 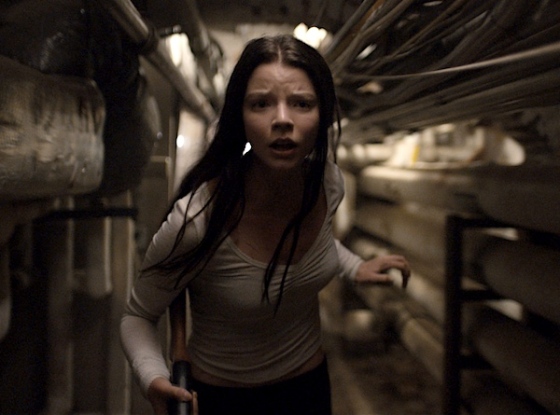 However, the really exceptional part of the movie is McAvoy’s performance. I don’t know how accurately or sympathetically the film handles the science of his character’s condition, but his embodiment of the role — of all the roles — is superb. The multiple distinct personalities aren’t created just by putting on a silly voice or funny costume; McAvoy changes the way he holds himself, the way he stands and moves, the way his face expresses. It’s the kind of performance that in a different kind of film would’ve been all over awards season.

I feel bad for not entirely assessing Split on its own merits, but equally I can’t help it — the thing that most excites me is where it promises to go next; the full-blown sequel to Unbreakable that many people (myself included) have been hoping would come for the best part of two decades. Maybe once that’s been and gone I’ll be able to revisit this and take it as a standalone piece.

Split is released on DVD and Blu-ray in the UK today.