It felt like half (at least) of the film-loving internet had somehow had a chance to see Baby Driver before its release on Wednesday, but I’m going to throw my two cents into the ring anyhow. Not that it makes a great deal of difference because, like most other folks, I bloody loved it.

Written and directed by Edgar Wright, director of the Cornetto trilogy and not of Ant-Man, the story focuses on getaway driver Baby (Ansel Elgort), a fundamentally good kid who has ended up suckered into a life of crime, working for robbery kingpin Doc (Kevin Spacey) and a rotating array of criminal compadres. An accident as a kid left Baby with “a hum in the drum” — tinnitus, if you want to get medical about it — meaning he listens to music all the time to drown it out, and also choreographs his daring drives (not to mention his walks down the street, etc) to the music he hears. One day he bumps into Debbie (Lily James) and falls in love, which happily coincides with his “one last job” for Doc. But once you’re in it’s hard to get out, and Baby again finds himself doing one more “one last job”, with a particularly volatile crew…

Baby Driver is a movie about three things: driving, music, and love. As Guillermo del Toro put it, it’s a kind of fable, or fairytale, with Baby as the prince and Debbie as the princess. In this respect it’s a change of pace for Wright, ditching the almost-spoof comedy of his previous successful movies for something more emotionally earnest. Not in a bad way, but in a kind of pure way, like a fairytale. This fairytale world isn’t all castles and dragons, of course — instead it’s full of violent criminals and fast cars; but it’s also a world where you can synchronise your getaway driving to the music on your iPod, so it’s hardly mired in gritty realism.

There’s a definite edge of Wright’s buddy Quentin Tarantino to this world: a cast of crooks delivering snappy, quotable dialogue to a near-constant soundtrack of deep cuts selected from the director’s music collection (plus a few familiar tunes for good measure) — the style of QT comes to mind more than once while watching. Fortunately Baby Driver’s style is more than homage or copycatting. Although it’s not a straight-up comedy, Wright does bring his own comedic touch (there are several big laughs), and the purity of emotion — that fairytaleness again — isn’t from Tarantino’s wheelhouse either. Plus, visually it presents a brighter and more colourful space than Tarantino normally inhabits. Most of the action takes place in the golden daylight of Atlanta and is filled with popping primary colours. There’s much great work by DP Bill Pope.

Though the soundtrack may have a Tarantino feel in its construction, that’s less prevalent in its usage. Characters communicate through song — not by singing them (most of the time — Baby first notices Debbie because she’s singing “B-A-B-Y”), but by connecting through them (that singing is followed by a discussion of songs featuring her name — both of them). The songs Baby chooses for boogieing around his small apartment, or for dancing down the street on a coffee run (in a title sequence that is marvellously choreographed, with dozens of small details timed perfectly to the track), help illuminate his true character — sweet and romantic — which is hidden by the sullen silence he adopts whenever around criminals.

Some have criticised the film for a lack of character, reckoning Baby’s silence distances him from the viewer so we never build a connection and don’t root for him. Frankly, I’m not sure what film they were watching. No spoilers, but Baby first opens up with something endearing and ingratiating in scene one. Right at the start. It could barely be any closer to the studio logos (and it kinda wouldn’t work if it were). I’m not arguing he’s the most charismatic lead ever to grace the silver screen, but Elgort makes fine fist of selling Baby as both a quiet, focused driver and a sweet, likeable, cheer-on-able hero.

And if you want character in general, the rest of the cast has it in spades, with an array of supporting roles that are as colourful as the cinematography. Recognisable faces like Spacey, Jon Hamm, Jamie Foxx, and John Bernthal get to cut loose as crooks who each have their own kooks, while lesser-known names like CJ Jones (as Baby’s foster father) and Eiza González (as the Bonnie to Hamm’s Clyde) make a mark too. Lily James may be placed in a dream-figure damsel role, but that doesn’t mean she can’t hold her own at times too. She’s not Wonder Woman, but she’s not a Manic Pixie Whatever That Phrase Was either. 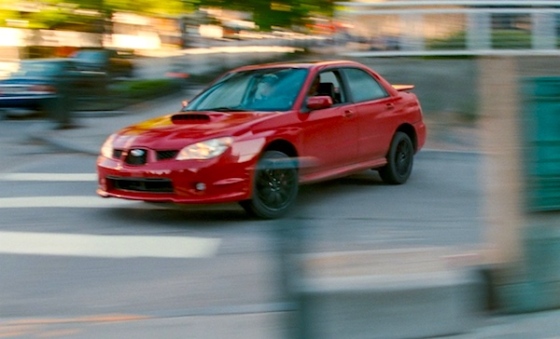 So, the one major thing I’ve only touched on fleetingly thus far is the main thing the film has attracted attention for: the driving. Done for real by stunt drivers with not a lick of CGI, that knowledge means it packs a viscerally real punch. But it’s not just snobbery: this is genuinely breathtaking action, slickly planned, masterfully performed, magnificently shot and edited. It’s this year’s Fury Road — a kinetic action spectacle made with skill rather than hand-waiving fast-cuts. Even more impressively, it’s been choreographed to music, but not in a draw-attention-to-itself dance-routine-y way. Perhaps saying it’s been synced to the music would be more accurate. Either way, it only heightens the effect. This extends beyond the car chases, too, including one marvellously musical shootout, the gunfire serving as percussion. The sound design throughout is exemplary. This is a movie that deserves to be remembered come awards season. Perhaps, again like Fury Road, some love will extend beyond the technical categories, too. Wright seems deserving of Best Director recognition, just like George Miller was.

But such back-patting is for much later in the year. For now, just revel in the gleeful moviemaking verve of a flick that already seems destined to be remembered as one of the greatest car chase movies ever produced.

Baby Driver is in cinemas many places right now, but not everywhere. It’ll be worth the wait, guys.