The final entry in Marvel’s multi-film campaign leading up to big team-up The Avengers (Avengers Assemble this side of the pond, don’t forget) sees them tackle a big name in comics that hasn’t previously transferred quite as well to the big (or small) screen. And, to jump to the end, it did well: $358.6m worldwide, which is about two-and-a-half times its budget… though still $91m behind the next-highest grossing of Marvel’s new wave, leaving it fourth of the five films.

But box office does not tell of quality, as the highest grossing films of all time surely tells us. That said, rather than fourth I’d probably rank it fifth.

Despite how such a negative start may sound, I didn’t dislike Captain America. In fact, I largely enjoyed it. It was, as I’m sure you know, released the same summer as Thor (that’d be last summer), and they make quite a good pair within Marvel’s little universe. They both begin by grounding the viewer on present-day Earth, before spinning off to a different time and place for a second prologue, before heading off to a third time and place to kick off a different kind of superhero story. In Thor it was a sci-fi/fantasy tale of God-like beings; in Cap it’s a World War 2-era superhero-without-powers. Not to mention the fact that they’re tied together by brief second prologues in the same small Norwegian town and a super-powerful artefact called the Tesseract. 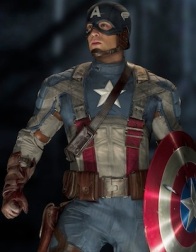 The connections don’t stop there. Some people complained that Iron Man 2 had too little focus on its own story and too much stuff setting up The Avengers. I disagreed, but I’d consider levelling such a criticism at Cap. While it doesn’t do it so overtly as the second Iron Man (this is set around 70 years before Nick Fury will come along with his Avenger Initiative), it feels at times as if it’s drawing together disparate threads from previous films in preparation for the team-up. Sure, most of the film works without knowing the connections — the fact that Cap’s shield cameoed in Iron Man 2, or that the super soldier programme plays a central role in The Incredible Hulk, won’t destroy anyone’s understanding of this — but, having seen those films (as surely most of Cap’s audience will have), it does feel almost as much a prequel to The Avengers as a film in its own right. Maybe the subtitle should’ve given that away.

Even aside from the inter-film connections, the story feels like someone gave the writers a checklist of “bits of mythology you must include” and they battled to shape a story around including them all. This results in a bitty narrative that jumps about, trying to include various WW2-era elements of Cap continuity ready for an ending that sends him to the present day in time for The Avengers. (Sorry if you consider that a spoiler, but I think the fact he’s in The Avengers rather gives it away.) To top it off, they also attempt to leave holes so that a sequel could be set in WW2 too, if so desired. While I appreciate that as an idea — the ’40s setting is a clear marker of why Cap is different to other similar heroes — it’s part of the reason it doesn’t feel like the whole thing quite ties together. 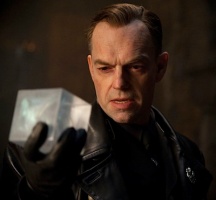 It also has the same problem that the first Iron Man did: there’s a lot of backstory involved in establishing Cap’s origins, leaving the villain to hover around the periphery until he’s needed for the climax. When said villain is Cap’s equivalent of the Joker in terms of significance, it’s a bit of a waste. They should be equals and opposites, and there are attempts to build that in, but the two don’t face off enough for it to really work. They both go about their own business, until they more or less bump into each other a significant way through the film, eventually leading to a climactic battle.

In short, I appreciate the attempts at creating a different structure for a superhero movie, but by trying to avoid the straight-up “hero encounters villain, fights against villain to end” shape of a tale, I think they’ve made something a bit too disjointed. I felt it was a series of shorter narratives connected by being placed end to end, not a single film-length story.

While I’m on things I felt they got wrong, let’s tackle the special effects. There are too many of them, meaning a lot looked quite fake to these eyes. OK, they tell the story just fine, and you might argue it gives a heightened comic-book-y feel, but I feel like I was seeing stuff of this quality six or more years ago, and I don’t believe I should be feeling that way on a movie this big. In fact, to be honest, the first Pirates movie was eight years old when this was made, and that was light-years ahead of this. Now, I think that movie had exceptional effects work, and it was well ahead of the average at the time… but that time was eight years ago.

It’s hard to say what exactly is wrong here, but it’s mainly an abundance of CG backdrops, green/blue screen stuff that doesn’t scan. Heck, in one shot you can see a blue glow around the edge of a character’s hair! That’s bordering on the amateurish.

The much-discussed ‘Skinny Steve’ — where effects wizards turned muscly star Chris Evans into a wimpy little guy for the film’s first act — is an intermittently good effect. Sometimes it’s astonishing, the equal of similar work from Benjamin Button; a completely plausible human being. Other times, not so much: in some shots his head is obviously disproportionate, or a character pokes the air when he’s surely meant to be poking Steve’s chest, or he looks oddly squished, or cartoonishly exaggerated… Like all the effects, the makers seem to have overstretched their means/budget.

I know special effects are a means to an end, and we don’t routinely criticise the fakery of back-projection and what have you in Old Movies, but I think the difference is filmmakers don’t have to go as far as they do nowadays. We’ve seen similar shots and scenes and effects that have been done more convincingly, and when lesser versions begin to distract you from the storytelling, there’s something at fault. Whether that’s the effects themselves or something else, like the story not being engrossing enough, is another debate.

Perhaps it was that episodic story, because one of the other main things I got from Cap was a long game of Spot The TV Actor In A Small Supporting Role. So prevalent did they seem that at times I was more focussed on that than anything else. Oops.

Still, do look out for Spooks & Robin Hood’s Richard Armitage, Boomtown & Desperate Housewives’ Neal McDonough, The Ruby in the Smoke’s JJ Field, The Tudors’ Natalie Dormer, The Mentalist’s Amanda Righetti, Doctor Who’s Jenna-Louise Coleman, and Scott & Bailey’s Ben Batt (blink and you’ll miss him). There are probably others, but those were the ones I knew. I imagine there are so many Brits in relatively small roles because it was shot over here. Not sure why, but it was.

Of the main cast, Chris Evans is fine as Steve Rogers, a guy so Honourable that it’s almost a thankless role — much like Superman, he’s almost too nice to be interesting. Not as bad as Superman can be, though, because at the start his good intentions surpass his physical means. It’ll be interesting to see how he plays in future films, especially The Avengers, where he’s going to have to face the awesomeness of Tony Stark. But that’s for other films. Romantic interest Hayley Atwell is perfectly up to task. Among the rumoured contenders for the role was Emily Blunt, who I can’t really imagine playing a character so supportive and fundamentally nice (a perfect match for Rogers, then), so I’m glad she didn’t get it. Shame for Atwell they bumped Cap into the future, automatically leaving her out of future franchise entries.

Elsewhere, Tommy Lee Jones could play roles like this grumpy-but-good-at-heart-General in his sleep, but at least claims the film’s best line. Equally, Hugo Weaving could be in a similar state of unconsciousness and give a good villain, and while he does his best to chew the scenery, I thought he was fine but unmemorable in an underused role. As I said, the screenplay positions him as a “we need a villain for a climax”-level enemy when his character should be The Hero’s Nemesis, leaving a waste of both character and actor. Co-villain Toby Jones is similarly ill-treated, although at least he may return, semi-reincarnated as another villain (no explicit clues in the film, but he is one in the comics).

Everywhere-man Dominic Cooper channels Robert Downey Jr and John Slattery to portray a young Howard Stark (Tony’s dad, natch), who had a bigger role than I expected. The rest of the cast appear for fan box-ticking (see my mythology comment), which means they also go underused. There’s only so much room in one film of course, and the focus is rightly laid on Cap’s journey. The small roles given to his team of army mates would have been fine as setup for a sequel, but as it’s been confirmed that Cap 2 will be set in the modern day, once again it’s good casting and character establishment gone to waste. Again, the film is attempting too much.

And I haven’t even mentioned the over-graded sepia hue, because it’s Set In The Past. Digital grading brought much potential to the film industry, but instead it’s pathetically and predictably overused. Whenever you compare a film itself to some B-roll footage in a behind-the-scenes documentary or somesuch, you suddenly noticed how not-like-real-life the film looks. In every thriller whites are actually blue, for instance. Here, I imagine if you compared it you’d find whites are actually bronze. I don’t imagine this kind of thing is going away now though.

I realise I’ve consistently laid into Captain America here. It has good points. I forgot to mention Stanley Tucci, for instance, who as an early mentor for Rogers is vital to the story and well played. There’s also some solid action sequences (eventually), and not too much 3D tomfoolery, and some humour, though not as much as Iron Man or Thor unfortunately. I did, overall, enjoy the film… just not as much as any other in Marvel’s Avengers lead-up. I wound up wondering if it would’ve worked better as a condensed 15-minute pre-titles to that film.

But hey-ho, here it is. Like I theorised at the end of Iron Man, maybe with this setup out of the way they can produce a better sequel… but considering the skinny-little-man-turned-muscly-superhero is one of the more interesting aspects of Cap, and they’ve done that now; and the World War 2 setting is another unique facet, which they’re leaving behind… sadly, I’m not holding out quite as much hope.

Captain America: The First Avenger is on Sky Movies Premiere from today (hence why I’ve reviewed it before Thor).

Avengers Assemble is in UK cinemas from Thursday 26th April. The Avengers is in US cinemas from Friday 4th May, and on various other dates worldwide.