The fad for shared universes, provoked by the success of the MCU, seems to be dying off: the Dark Universe, the DC Extended Universe, Fox’s X-Men films, the MonsterVerse, sundry others most of us can’t even remember — they all either died a quick, brutal death, or circumstances have wiped them out. Even those that are ongoing have either abandoned close interconnectedness (like the DCEU) or don’t have long-term plans (the MonsterVerse, which has nothing announced beyond Godzilla vs. Kong). The MCU still seems to be going strong (although we haven’t actually had a new MCU movie in over a year now, so who knows what the future will hold?), but other than that? Everyone seems to have realised the formula is impossible (or too much hard work) to replicate.

The exception lies in Sony’s desire to launch a superhero universe out of the one character whose rights they own: Spider-Man. It started when they abandoned Spider-Man 4 to go the reboot route with The Amazing Spider-Man, the sequel to which teased all sorts of stuff to come, some of which was announced. Those movies’ failure to live up to their titles (i.e. they were not amazing, in any respect) saw such plans cancelled, but it seems Sony don’t give up so easily — even after they loaned out Spider-Man himself to the MCU, moves to form their own universe have continued.

Which is what brings us to Venom. For those not in the know, he started life as a Spider-Man villain (if you’re not a comic book reader, you’re most likely to know him from his appearance in Spider-Man 3, a move forced by the studio that contributed to the film’s relative failure), but he later became an anti-hero in his own right, which positions him quite nicely for Sony’s first actually-filmed-and-released foray into a shared Spidey universe. (A lot of the other Spider-Man characters they own the rights to are villains, though after the success of Joker I guess they’ll feel emboldened to attempt villain-centred films.) And, to the surprise of some, Venom earnt over $850 million at the global box office, making it the 7th highest grossing film of 2018. Sony’s Spider-Man-universe-without-Spider-Man is definitely underway (there’s a sequel due next year, alongside other Spidey-related films both ready for release and in active development). 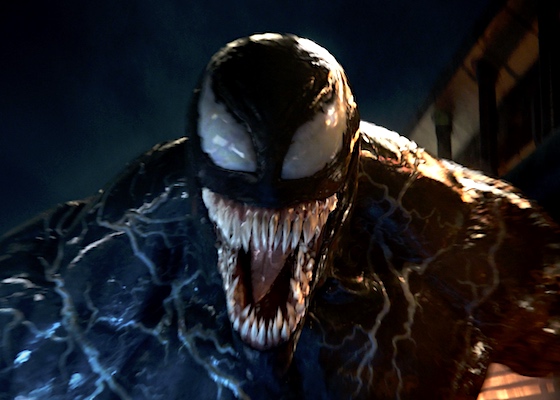 But enough about future plans, because perhaps one reason Venom has been such a success at launching a new universe is that it didn’t try too hard. Unlike The Mummy or Batman v Superman, this isn’t a film bogged down with characters and references designed to tee-up future spin-offs. It’s an entirely standalone adventure, in which struggling journalist Eddie Brock (Tom Hardy) bonds with an alien symbiote that can take over his body and do powerful things. The alien is one of several brought to Earth by the explorations of Elon Musk-esque tech billionaire Carlton Drake (Riz Ahmed). In the mould of many an overconfident movie scientist before him, Drake hasn’t bargained on the aliens having their own agenda — to invade Earth and eat the populace, i.e. us. But for some reason Brock’s alien, Venom, takes a liking to the planet and vows to protect it.

It takes the movie quite a while to get to that point, mind. Sorry if you were wary of spoilers, but, I mean, it’s hardly a surprise that (a) a race of aliens that look like Venom are going to turn out to have vicious motives, and (b) the titular character is going to turn out to be a good guy who wants to save us. There’s certainly a place for slow-burn movies that take their time to get to the point or to reveal the monster, but I’m not sure a summer superhero blockbuster is one of them. While Venom isn’t exactly boring until Venom turns up, it does feel like we’re going through motions until we get to what we’ve come for, i.e. a crazy powerful alien kicking ass and biting off heads.

It feels further unbalanced because Venom is actually quite short. You might’ve clocked the 112 minute (aka 1 hour 52 minutes) running time and thought that sounded pretty reasonable (even if nowadays most blockbusters are well over 2 hours), but the actual content of the movie runs only a little over an hour-and-a-half, topped up by a long credits scroll and a lengthy post-credit promo clip for Into the Spider-Verse. (I can see why they included that in cinemas, but leaving it in the home release feels unnecessary. Apparently it’s cut from some digital versions.) According to IMDb, Hardy has said that half-an-hour or so was cut from the film, including his favourite sequences. Why those cuts were made and what exactly went, I don’t know, but even in the released version it feels like they could’ve slimmed down the first 50 minutes and put in more of Venom himself. 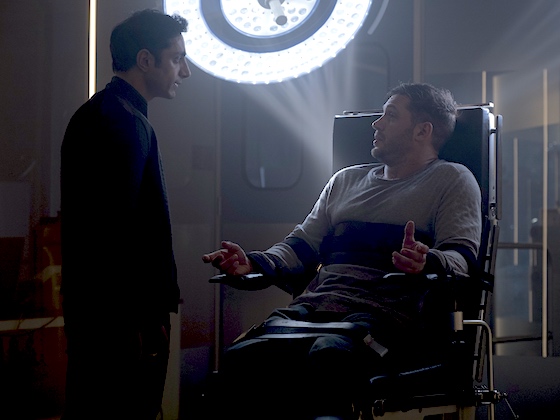 Partly this is the plot suffering from having to be an origin story, with all the usual issues that brings: a lot of time spent on setup; a villain who’s sidelined for the bigger point of Eddie and Venom finally coming together. Once it reaches that point, it’s allowed to indulge in the barminess of the character and the situation a little. All while playing safely within a PG-13 box, of course. Venom is kind of a ’90s teenager’s idea of what it means to be edgy and dark, and by staying faithful to that the film version consequently feels quite like an early-’00s superhero movie. There’s even an Eminem theme song. It reminds you how far superhero movies have come, though. I mean, they were hardly held in the highest esteem back then (aside from breakout examples, like the first couple of X-Men and Spider-Man movies), and it’s not just time that has changed attitudes but also developments in how they present themselves. But now, that it’s a bit of a throwback is part of Venom‘s charm — or another reason to dismiss it, if there’s no nostalgia in that for you.

Certainly, the cast are all better than this. Sometimes that elevates it — Hardy is having a ball talking to himself and doing random shit like climbing in lobster tanks — but other times it feels like people are here for a payday. Riz Ahmed’s character arc is gradually whittled down to nothing, replaced by a CGI monster. And what made four-time Oscar nominee Michelle Williams decide this was a part worth her time? (Turns out the answer is “the chance to work with Tom Hardy.” But I’m sure the cheque didn’t hurt either.) Hardy has spoken a few times about how he wanted to make a movie his son could actually see. A superhero movie seems a good shout for that but I don’t know that Venom was the right pick. The film is clearly aiming for a PG-13 (there’s only one “fuck”; it’s not particularly gory), but the horror sequences and violence were enough to push it up to a 15 over here. And that’s probably fair — there are twisted and broken bodies (even if they then fix themselves), and several instances of biting off heads (it’s not shown in graphic detail, but we’re fully aware that’s what’s happening).

All things considered, I wasn’t sure what I thought of Venom. It’s kind of fun, in a juvenile way (juvenile like teenagers who think violence and edgy dialogue is “grown up”). But it’s also kind of rubbish in places, in part because it can be so juvenile (juvenile like… yeah, same again). There’s a chance it’ll tee-up a superior sequel — with the origin stuff out of the way, hopefully we can expect a more original storyline; and, as it was such a hit, maybe that’ll allow the filmmakers leeway to go even barmier. For one thing, a brief sequel tease suggests Woody Harrelson is all ready to Woody Harrelson it up. Until then, I guess this’ll do as a crazy placeholder.

Venom is available on Netflix in the UK from today.